Brad Keselowski enters the 2022 season with a plethora of change – a new team, new role, new car number and new vision – as he embarks on a journey he’s dreamt of for many years. A veteran and Champion entering his 13th full season in the NASCAR Cup Series (NCS), Keselowski is now a part-owner in Roush Fenway Keselowski Racing (RFK) and will pilot the iconic No. 6 Ford. 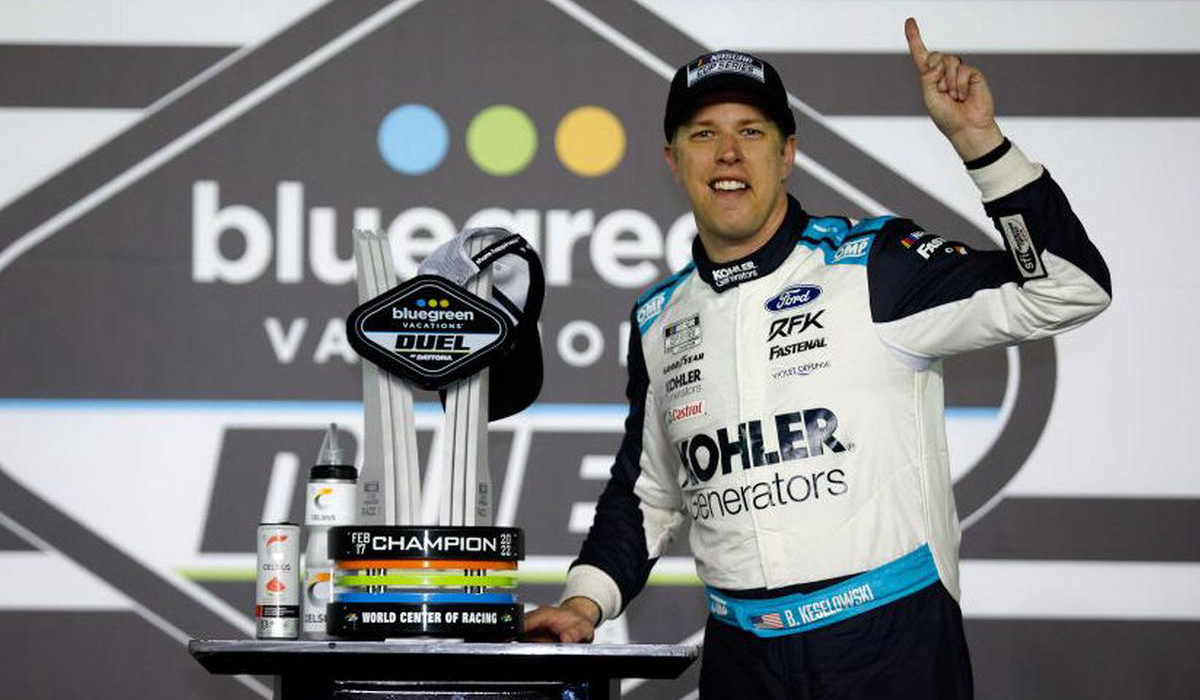 Brad after winning at The Duels in Daytona in February 2022.

Keselowski has been a consistent contender at NASCAR’s highest level for the past decade, having tallied 35 wins in NCS competition while qualifying for the NASCAR Playoffs for 10 consecutive seasons. He led Team Penske to its first NASCAR Cup Championship in 2012 and has finished inside the top-10 in eight of the last 10 seasons, including a runner-up finish in 2020. Overall, Keselowski boasts 75 NASCAR wins and has led more than 14,000 laps.

The 2021 season capped off what was a 12-year tenure with Roger Penske as he advanced to the Round of 8 in the NASCAR Playoffs and finished sixth in the final points standings. Keselowski added to his win total by taking the checkered flag at Talladega in the spring race, one of his 17 top-10s on the season, 10 of which were inside the top five. He backed that up with a runner-up result in the fall at Talladega as he and the No. 2 team put together an impressive run with seven top-10s in the playoffs.

Keselowski closed the 2020 Cup Series season ranked second in the standings for his best season finish since he won the title in 2012. He also produced an average finishing position of 10.1 to equal his career-best mark. After he earned a spot in the NASCAR Playoffs for the ninth time in the last 10 seasons, Keselowski raced his way into the Championship 4 as he advanced to the final round for the second time since the Cup Series’ elimination format was introduced in 2014.

Keselowski and the No. 2 Ford team captured four NCS victories in 2020, highlighted by an overtime win in the Coca-Cola 600 on Memorial Day weekend at Charlotte Motor Speedway. The performance gave Keselowski victories in three of NASCAR’s major events (in 2018 he won the Southern 500 and the Brickyard 400) and it marked his first career triumph in NASCAR’s longest race. Keselowski won at Bristol Motor Speedway one week later and he also produced dominant victories at New Hampshire Motor Speedway and Richmond Raceway. Keselowski shined on short tracks in 2020 as he led all series competitors with the most wins (two), top-five finishes (four) and top-10 results (four) on the smaller circuits. He also won three or more races for the fifth consecutive season and qualified for the NASCAR Playoffs for the seventh consecutive year.

Keselowski produced some memorable victories for Team Penske over the years, including some historic recent performances. In 2019, his first win of the season came at Atlanta and it marked Keselowski’s 60th career victory with Team Penske as he became the winningest driver in team history. Keselowski scored dramatic wins on three consecutive weekends in 2018 that were also landmark victories for the team. He won the Bojangles’ Southern 500 on Labor Day weekend at Darlington Raceway to mark Team Penske’s first victory at the historic speedway since Bobby Allison swept both races there in 1975. Just a few days later, Keselowski gave team owner Roger Penske his first-ever Cup Series win at the Indianapolis Motor Speedway. And less than a week later, Keselowski won at Las Vegas Motor Speedway to produce the 500th victory in the team’s storied history.

The first big break of Keselowski’s young career came in 2007 when he competed for Germain Racing at Memphis Motorsports Park. He won the pole and led 62 laps, a performance that ultimately landed him a ride in Dale Earnhardt Jr.’s No. 88 NXS full-time entry just two weeks later. In 2008, Keselowski won two races for JR Motorsports and in 2009 claimed his first NCS victory driving for James Finch at Talladega Superspeedway. Keselowski caught the eye of Roger Penske, who hired him to compete full-time for his team in 2010. Since he joined Team Penske, Keselowski won a remarkable 67 races (combined in NCS and NXS competition), the team’s first Cup Series championship, an NXS Driver title and four NXS Owner Championships.

Away from the track, Keselowski married his longtime girlfriend Paige White in February of 2017 and the two live in North Carolina with their young daughters Scarlett and Autumn. Brad and Paige are both active with Brad Keselowski’s Checkered Flag Foundation, which honors and assists those who have sacrificed greatly for our country. Since 2010, the foundation has supported over 50 organizations and individuals in order to help veterans and first responders during their road to recovery.