The Meaning of Winning

That’s a question — along with what it’s like to drive a race car — that I’m asked a lot. And after winning both races at Las Vegas this past weekend, it seemed like a pretty natural topic for this week’s blog.

But it’s hard to anticipate the emotions that you experience after a big win. Sunday night, flying home after the weekend, I found myself thinking about one person in particular. His story is one that’s deep and personal, one I’ve never shared with anyone but those in my closest inner circle. I don’t think anyone outside that circle even knows about it. That story came to an end on the weekend of my last victory, which came in October 2013 in Charlotte.

I’m going to tell it to you now. 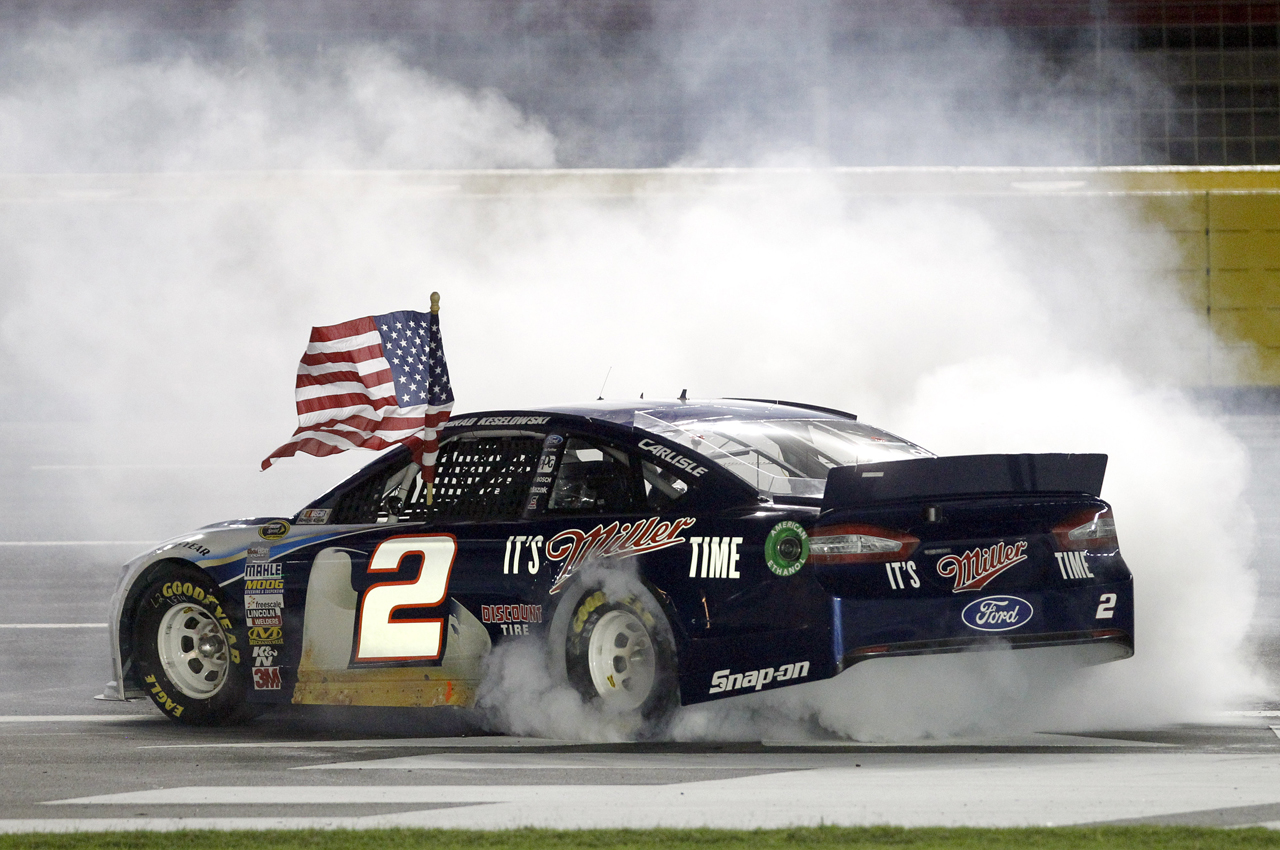 FRIENDS ON THE RISE

The day in 2007 that I moved to North Carolina to drive Dale Earnhardt Jr.’s Nationwide car, I moved into Dale’s guest house, which was located near a series of townhouses that Dale also owned. I made a friend there. I’m going to use only his first name for his family’s sake. His name was James.

James and I were about the same age, in our mid-twenties, and both of us had very similar stories as far as trying to break into racing went. He had studied to get an engineering degree, and was looking to turn that into an engineering position in racing. At the time, James was working as an understudy/mechanic’s apprentice at JR Motorsports.

Neither of us had two nickels to rub together, but we lived near each other, we were on the same team and we were kind of all in it together. So naturally, we built up a friendship right away. He became one of my great friends.

To those who paid attention to the sport, James was probably most recognizable because he was African American. Even though it’s gotten easier to be an African American in the sport of auto racing, it still isn’t easy by any means. But James never used that to his advantage. He just thought of himself as another guy. I always respected that about him.

As time went on, James and I both started to make it a little bit further in the sport. He caught on as an engineer, and became affiliated with Hendrick Motorsports about the same time I left JR Motorsports to join Team Penske. I moved away from that area, but maintained the friendship with him, especially over the winter. The offseason is the time when you can be friends without having to worry about sharing team secrets.

It seemed like we were both on our way.

Then cutbacks hit the racing industry because of the recession. James didn’t make the cut. The next thing I knew, he had gotten laid off.

I felt bad for him like you would feel bad for anyone who loses their job, especially someone you’re friends with. I tried to help him out by bringing him onto my truck team, but we didn’t have much success with funding on the truck team, either, and I couldn’t afford to keep him.

It got to a point where he couldn’t afford the place he was living at.

Around that same time, I broke my ankle in a bad crash during a test at Road Atlanta. I was at home all alone, having some issues getting around my house, and it seemed like something always needed fixing. Because we were good friends, I told James that until he got back on his feet and found another job, he could stay at my place, rent free. All I asked him to do was take care of the place, and keep things going. It just made sense. He could help me out. The house was a lot bigger than I needed anyway.

So James moved in.

He was a friend of mine. I had a lot of respect for him. He was just in a really bad spot because he couldn’t find a job in racing, and didn’t know anything else.

About a year and a half went by, and he essentially became my roommate. All the while, he kept trying to find a job in the industry, but he didn’t have much success. He was going through all the hardships that those who don’t have a job go through. It was kind of a bummer to see, because just like me, James didn’t know anything else but racing, Not having a job, not having any money can be really tough on you mentally. He went through some bouts with depression.

Then around the middle of last season, I heard James was having issues with the law.

At first, I didn’t want to believe it. He was a friend of mine. I had a lot of respect for him. He was just in a really bad spot because he couldn’t find a job in racing, and didn’t know anything else. No one knows for certain what they’d do in the same situation. Who knows — maybe I would’ve done the same thing. But eventually the facts just got so strong that I knew I had to do something. I felt terrible, but I also knew I couldn’t have that around me. So I asked him to leave.

THE WORST OF TIMES

Not long after James moved out, several items went missing from my house. Among them were military rifles — some that I had purchased, others that I’d received from military friends I’d met through my foundation. That made me pretty nervous. These were rifles that could do a lot of damage if they got into the wrong hands. I asked the police to investigate. For more than a month, they kept coming back and telling me that they thought James had them. Again, I didn’t want to believe that.

This was all happening around the time of the October Kansas races last year. That particular weekend, I got into an incident with Kyle Busch in the Nationwide race. The following Monday, someone broke into the Brad Keselowski Racing shop where we kept my Camping World Trucks Series trucks. They left a Monster Energy can on the front desk in the lobby. (Monster is one of Kyle’s sponsors.) We thought it was just some kids messing around. Pranks happen a lot in that area, so we moved on.

A few days later, the police found James. They asked if he had the rifles, and told him that if he gave them back right then and there, they would not prosecute him, and we could all just move on. I agreed. I didn’t want to see James in any legal trouble. I just wanted the stuff returned.

When they got the items back from James, they asked if there was anything else he had taken, giving him a chance to give everything back that he might have. In addition to the rifles, he handed over some papers.

Among them were files that had gone missing from the truck shop.

Suddenly, as far as the police were concerned, the deal was off. The truck shop was located in another county. It was no longer my choice whether to press charges. That county decided they were going to arrest James, and charge him with breaking and entering. They decided that the best process would be to call him, ask him where he was, and tell him they were coming to pick him up.

When he received that call, James fled the area, which was even more concerning because we were nearby, right in the middle of the race weekend at Charlotte.

The situation got really dicey. The police sent a couple officers to my house to keep watch. A few more were sent to Charlotte Motor Speedway, joining NASCAR security there at the track. I wound up staying off-site in my bus instead of at my house.

There was an ongoing manhunt for James.

That Saturday, we went out, ran the race and I won. It was my first and only win in the 2013 season. The next day, we had a party at Paul and Aleah Wolfe’s house. A lot of the crew guys asked me why I wasn’t more excited. I couldn’t tell them, which was kind of heartbreaking. And the police still hadn’t found James. I ended up spending that night on Paul and Aleah’s couch.

Monday, I went to Charlotte Motor Speedway to run a test for NASCAR’s new rules package for 2014. I received a phone call from my sister. They had just found James.

My heart sank. From the sound of her voice, I already knew what had happened.

THE MEANING OF WINNING

For the first time in the last few years, I have a steady girlfriend. Her name is Paige. She was the one who pushed me to tell this story. I wasn’t sure how I felt about it, but the more I thought about it, I realized she was right.

I credit her for that. 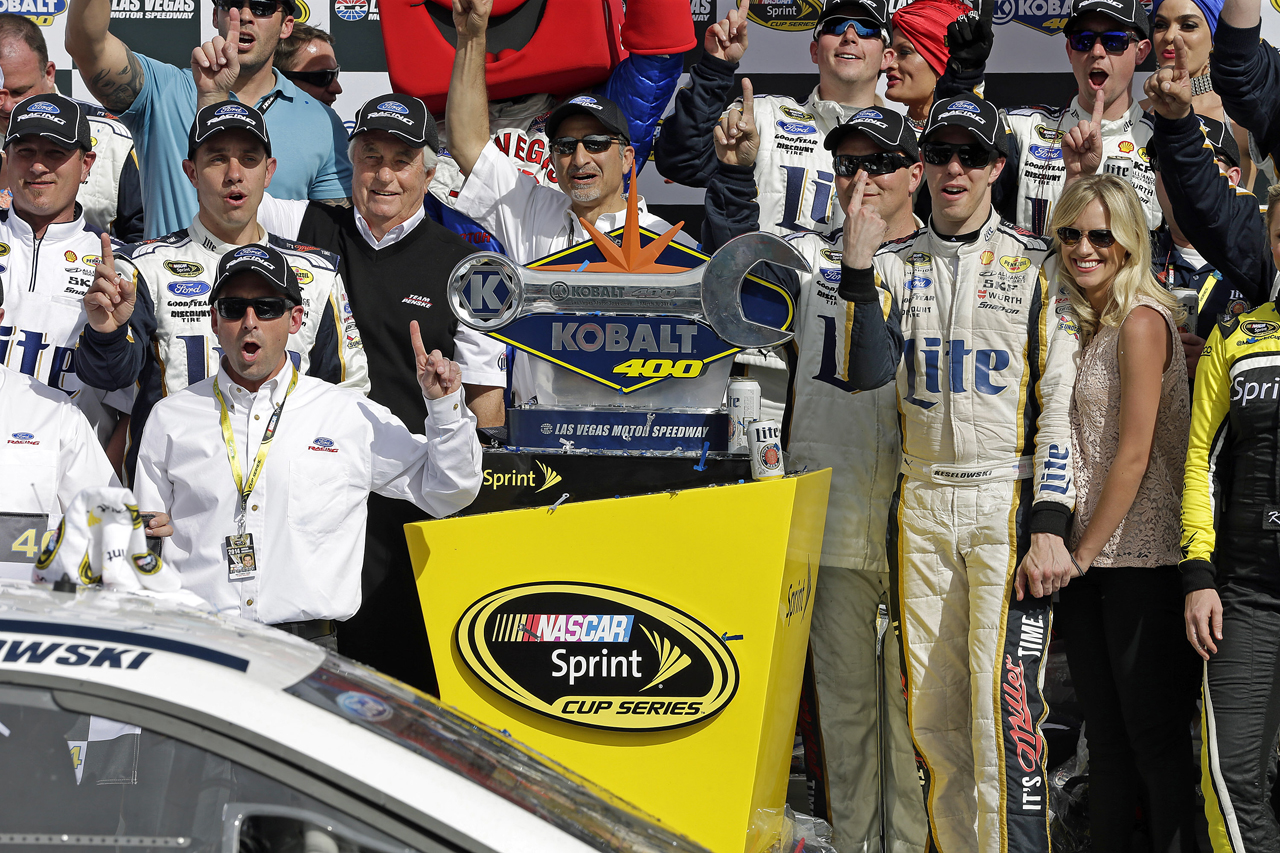 When our team wins a race, it’s always a little difficult for me to celebrate and really let my emotion all the way out. Part of that is because I know how lucky I am to be where I am, and to have made it so far in this sport. For me, it involved making sacrifices like deciding not to go to college, and later leaving home on my own to try and make it.

But there are a lot of others just like me who put everything on the line to try and make it — who burned their ships like Cortes, as I referenced in my last blog entry. They made those same sacrifices. And a lot of those people didn’t make it. It’s because I’ve been there and sacrificed that I really feel for those people. It’s something I’m mindful of when celebrating a win.

This blog entry is a tribute to them.

(If you need help, please visit the National Institute of Mental Health or contact National Suicide Prevention Lifeline at 800.273.8255.)