I’ve never been one to run away from drama, perhaps to my own detriment.

I had a lot of success with that approach.

In 2013, I got away from that, mostly because I thought the way I did things in 2012 somehow tarnished winning the championship. But with a little bit of hindsight, there’s a part of me now that says maybe that’s what made me so strong in 2012. I wasn’t afraid to fight off controversy. I wasn’t afraid to put my neck out there on the line a little bit, and go for it. I wasn’t afraid to show people that this is where I’m at, this is my passion, this is what I do and who I am, and I’m going to be the best at it.

So with that in mind, let’s talk about Kurt Busch and last weekend at Martinsville.

What most people probably don’t realize is that everything that happened Sunday actually started with a slow pit stop. We made some changes to our pit crew to start the season, and while we’re all working hard as a team, we’re still working out the kinks. I feel we have fast enough speed in our cars to run for the championship in 2014. When we find our consistency on pit road, we’ll have all the pieces.

We came out of our pit stop about two seconds slow. When that happened, it put me out of sync with the cars I was running around. So I didn’t know who was where or where I was supposed to be. The 31 car — who had been behind me when we entered pit road — came out three or four cars in front of me. And right in front of me was Kasey Kahne.

When you see Kasey Kahne in pit road, your natural assumption — him being the level of driver he is and his team being the caliber that it is — is that you’re racing him for position at that moment. That was not the reality of the matter. Kasey had trouble before that sequence and got torn up. He was running at the very back of the pack. And rather than exiting pit road with me, he was actually just turning into his stall. 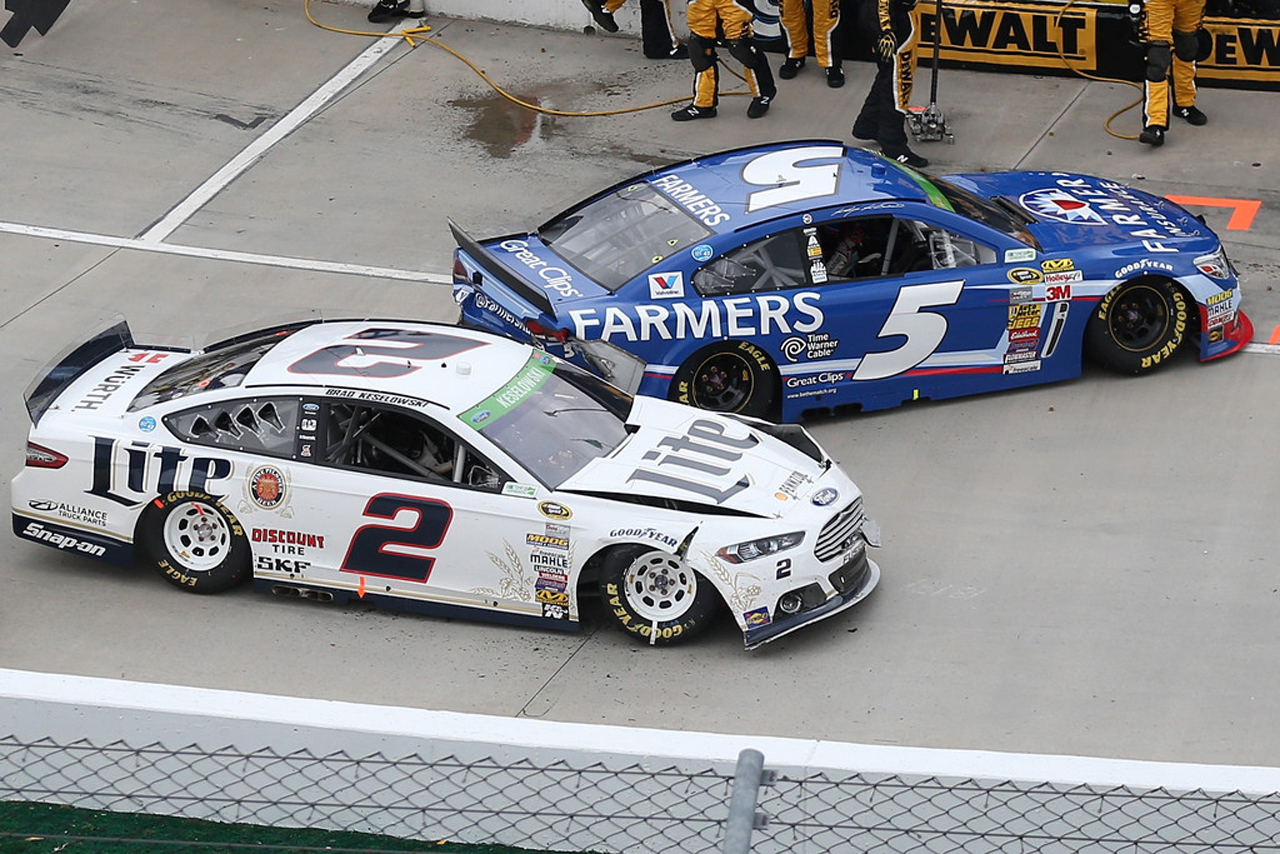 There was barely time to react. I hit the brakes and turned right, but I’d already made pretty severe contact with Kasey.

Then Kurt hit me pretty hard. Pit road speed is about 35 mph there, which is relatively slow. When you see contact in front of you, usually you slow down, or you’re able to slow down to 15 or 20 mph. When I hit Kasey, I was probably going 15 or 20 mph. So when Kurt hit me, I thought it was really strange that he had hit me so hard — hard enough to tear the right front suspension off the car.

The Blanco Deuce was broken so bad we had to head back to the garage. After I got out of the car, I caught a replay of what had happened.

I misjudged the situation and ran into the back of Kasey, which I pretty much already knew. What I hadn’t seen before was that in the stall right behind Kasey’s, the 9 car was dropping the jack to take off just as Kasey was turning in. That’s why the 5 car stopped even harder than I thought he would.

Then I saw how Kurt had hit me.

DO AS LITTLE HARM AS POSSIBLE

As a race car driver, if there’s an accident, it’s our duty — not just for ourselves but for our fellow competitors out there — to try to diminish it, to lessen the impact as much as possible. Imagine you’re at Talladega. If there’s a wreck at 200 mph in front of you, and you are capable of slowing down to 100 mph, you do it. Self-preservation alone just dictates that, but it’s kind of an unspoken rule between drivers. (At Bristol a couple weekends back, Kasey didn’t lift after David Ragan wrecked, and Dale Jr. had some words for him afterward.)

In my experience, Kurt doesn’t think that way. He has phenomenal, God-given talent that far exceeds probably everybody in the field, and he’s done some amazing things in a race car. He won the International Race of Champions back in 2003, which was a pure talent-based series. In 2004, he won the NASCAR championship in the final weekend of the season, getting a win at Homestead after losing a wheel earlier in the race. And in 2012 at Sonoma, Kurt ran a backmarker car and almost won the race with it.

Most people thought I was mad at Kurt because he ran into me. That was never it.

But how Kurt drives when there’s an accident brings up some issues for me. I’ve had some instances with Kurt over the last two or three seasons where the same thing kept happening. Essentially, there would be a wreck in front of us or beside me, and Kurt wouldn’t slow down for it. He’d just drive right through it, and in doing so, he’d put his own team and effort at risk, and he’d put me at severe risk, too.

This past Sunday, he took what was going to be a bad situation, and made it much worse. Don’t get me wrong: It’s racing. Accidents happen. Pit road accidents happen. But the replay confirmed what I thought.

There was a wreck. Kurt didn’t slow down.

After the race, when I did the TV portion of the broadcast, I didn’t do a great job explaining myself in the heat of the moment. It’s hard to do because you’re fueled with emotion, and you’re not thinking as clearly as you should. But based on that interview, most people thought I was mad at Kurt because he ran into me.

That was never it.

I was mad because when he ran into me, he made no effort to minimize the damage.

I’m not cool with that.

It took a while, but our guys did their best to get our car in a condition where it could get out on the race track. Someone told me it looked like something out of The Road Warrior. I kind of like that.

To be able to get the 2 back into driving shape shows our team’s commitment. On a track like Martinsville, you can run a car that’s torn up that bad, and actually run decent speeds because of how the track works.

After I was back on the track, I got into Kurt so he knew that I was upset. I didn’t want to ruin his day, and clearly, I didn’t. He went on to win the race. If I’d wanted to, I would have wrecked him. I don’t believe in intentionally wrecking anyone, so that wasn’t going to happen. But I wanted to communicate a message. And not just to him. 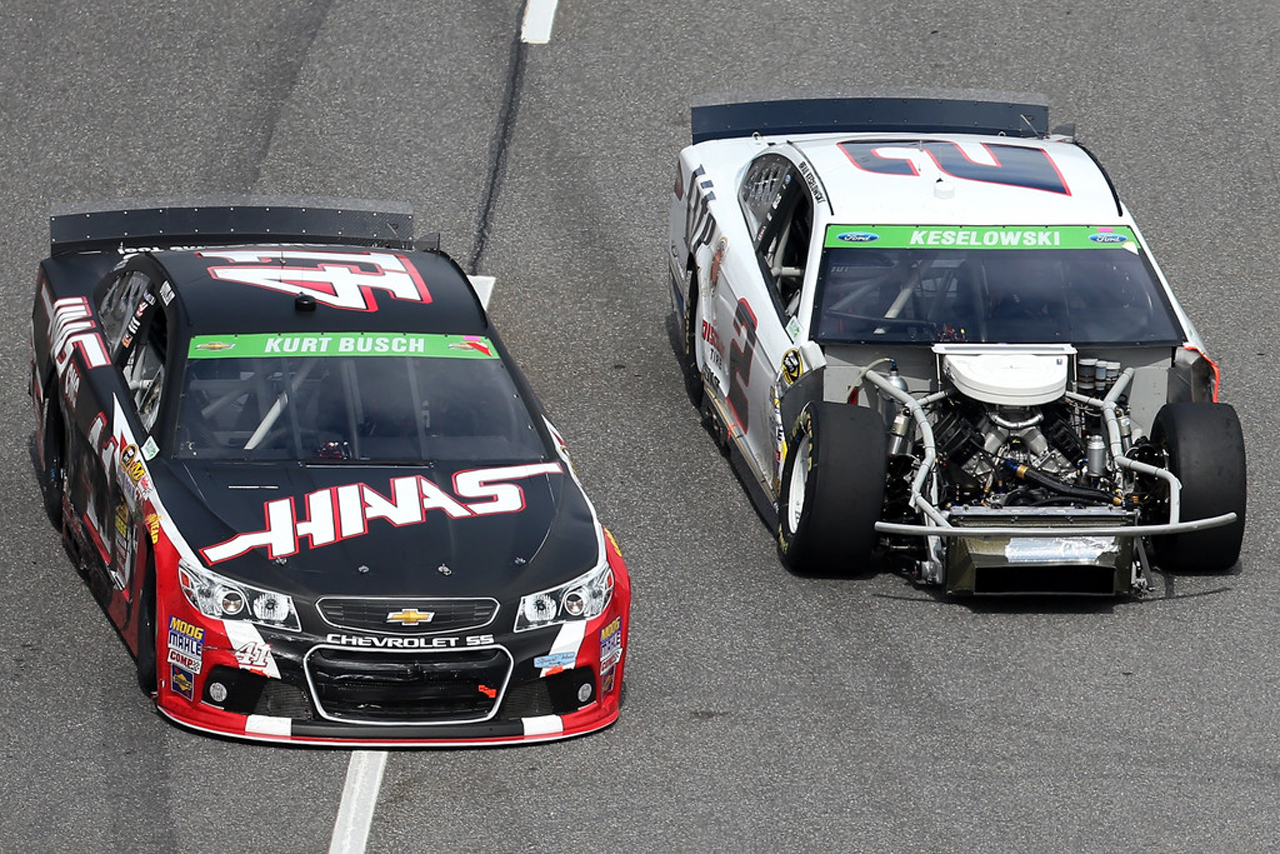 Keep in mind: in those situations, everybody is watching. So even if Kurt doesn’t get the message, the other drivers and teams will.

Moving ahead, as far as Kurt is concerned, my feeling is this: I got my message out. What’s done is done. I’m ready to move on. Kurt controls what goes on from here. If he feels like he needs to do something else, that’s up to him.

Finally, there was one other reason I wanted to get back onto the track Sunday. I also wanted to communicate a few things to my team.

First, I wanted them to know that I wasn’t okay with what happened, and that we aren’t going to be pushovers.

Second, I wanted the team to know that we don’t give up.

Racing is probably its most dangerous when there’s something wrong with your car. In this particular instance, if something would have broke on the car, there wouldn’t have been a front crash zone in it. There’s a good chance I would have got hurt. I could very easily have said, “No, I’m not going back out guys. The risk is too high and the reward is too little.” We didn’t do that.

A driver sets the tone for his team. We weren’t going to be running away. We never will.

And I’m going to fight for them.