What wins a race? Is it the car, or is it the driver?

I’m asked this question all the time by fans, and as we approach the All-Star Race — and consider who the best drivers are in our sport — it seems like a pretty good time to take it on. I’m excited to share my thoughts with you, and just as excited to start a discussion about the topic with other drivers, media and fans, and hear what all of you think.

In the six years that I’ve been at the Sprint Cup level, the cars have changed so much.

It used to be that a stock car was fairly difficult to drive by itself. What that means is that the car would spin out a lot or move a little sideways. The car also would really degrade the tires, and wearing the tires out causes the car to slide around a lot, too. Just in general, a stock car could be a handful. But when the cars got in traffic, they mostly drove very similar to how they drove by themselves, so that there wasn’t much of a changeover.

Well, over the past decade or two, that’s changed considerably. Through technology and aerodynamic developments — computational fluid dynamics, for example — cars have gained a lot of speed. Along the way, they’ve also become markedly easier to drive by themselves. So now, the tires don’t fall off so much. The car doesn’t slide around near as much. When a car gets a little bit loose, it’s very recoverable. 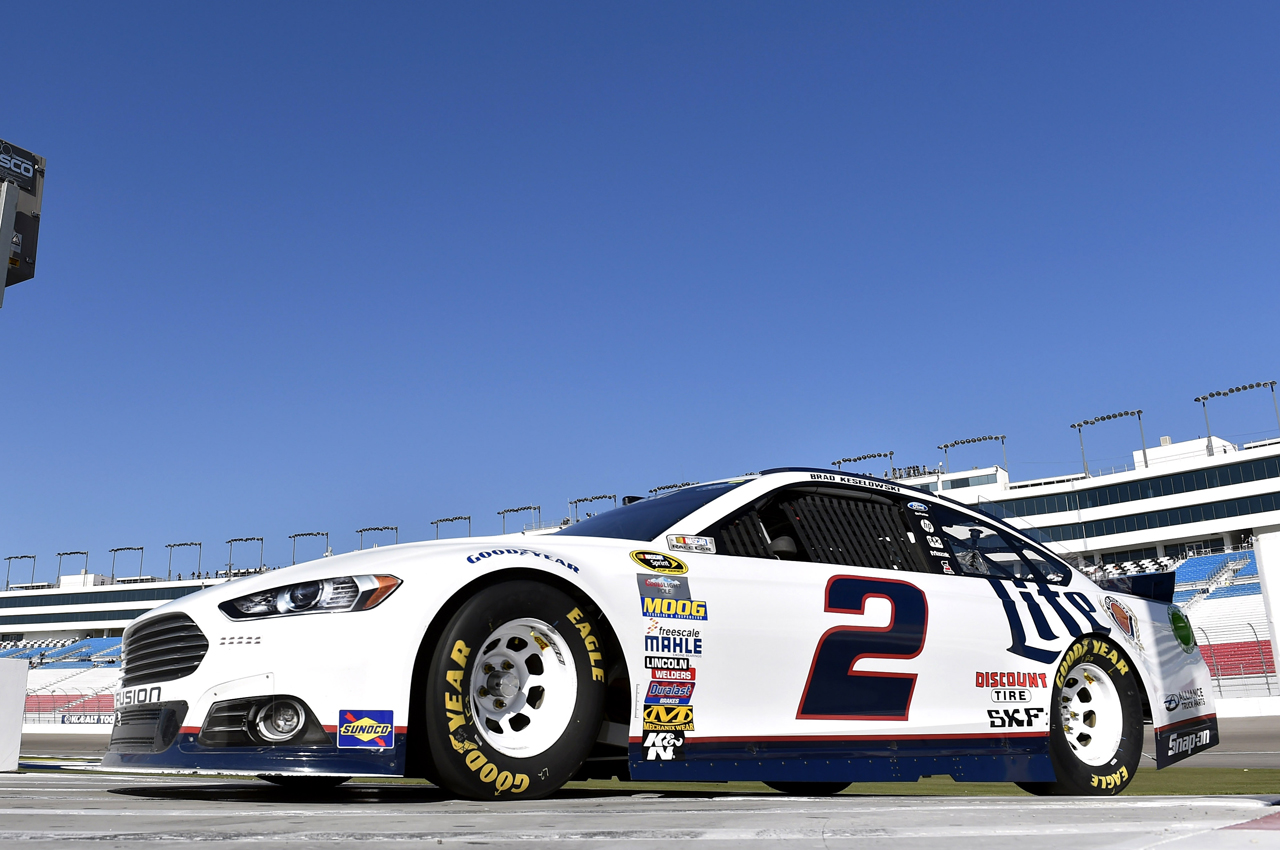 STOCK CARS HAVE CHANGED A LOT OVER THE YEARS, ESPECIALLY IN THE LAST FEW YEARS.

But to counter that, the cars are extremely poor to drive in traffic . They don’t recover themselves very well. They lose a lot of grip. They slide around a lot. They’re unpredictable. The aero wake off of a car is so much larger than it used to be, especially when you’re right behind another car. Imagine that instead of following another car on the freeway in traffic, you’re following a tractor-trailer. That’s how big the aero wake has grown. If you were to get real close behind that tractor trailer or pull up beside it on the freeway, you’d notice how much your car would move all around. You’d feel out of control.

Now multiply that feeling by three — because you’re going 180 or 200 on the racetrack instead of 60 — and you have an idea of what it’s like.

What that means is that a driver who’s in the lead and pulling away from the pack has a great car. Leading alone isn’t necessarily all that impressive. It also doesn’t mean that a driver with a big lead is the best driver, though he very well could be.

With the exception of variable races — restrictor plate or fuel mileage races, namely — you need a top-five car to win a Sprint Cup race. That’s something that you know before race weekend even starts. It might be the first-place car. It might be the fifth-place car. But a car with top-five speed will win, and the simple reason is this: not having a top-five car is too much for a driver to overcome. You will not win a non-variable Sprint Cup race without top-five speed.

In years past, we would measure a quality driver by his ability to lead laps, and win races in dominating fashion. That’s actually the origin of loop data, the statistics that NASCAR compiles — kind of like a quarterback rating — to try to tell you who the best drivers are. But since the cars are doing the majority of the work when you’re leading by yourself or qualifying in 2015, it makes you think twice about the value of loop data. As I said before, more often than not, the most skilled driver isn’t the driver who goes the fastest in the clear.

Today, in my opinion, the best drivers are measured by their ability to get through traffic. 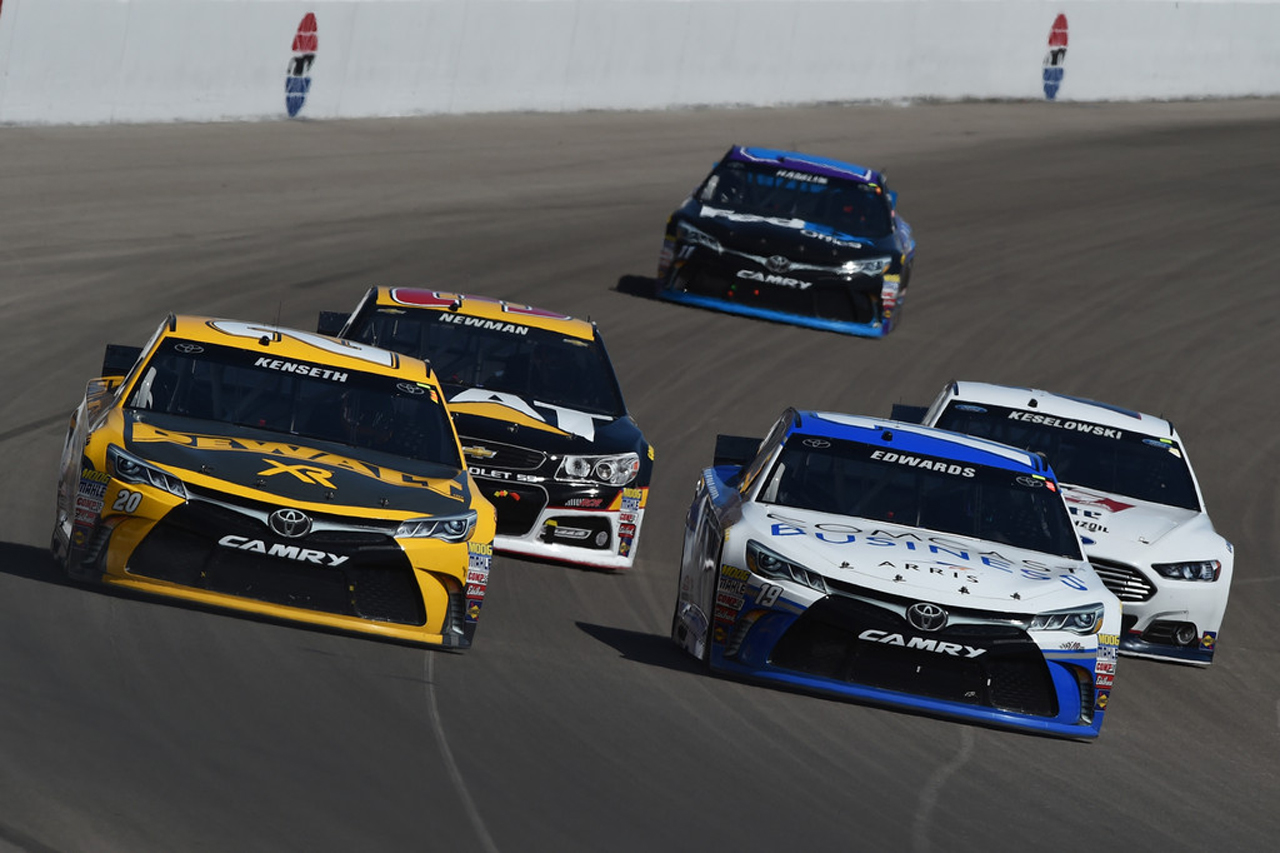 CARL EDWARDS AND MATT KENSETH ARE IMPRESSIVE DRIVERS BECAUSE OF WHAT THEY GET OUT OF THEIR EQUIPMENT.

Because there can only be one winner, what a driver considers a great day is not what a fan might consider a great day. For example, when I watch a great race car driver, I don’t just look for a guy that wins. When you look at a winner in Sprint Cup — and certainly this happens very often, more times than not — often you’re seeing the best car win a race. That’s not always that impressive unless the driver’s had some kind of significant adversity to overcome.

One of the reasons I have so much respect for Carl Edwards’ performance last year was because he had a 15th or 20th-place car for most of the season. And with that car, he not only made the Chase — he made a run into the playoffs, and finished the year ranked in the top 10. He won two races. Matt Kenseth is also excellent at taking a car that’s not a winning car, and maximizing his day. He makes a habit out of taking a 10th-place car and running fifth, That’s impressive to me.

Back in the day, Dale Earnhardt took fifth to 10th-place cars, and won with them on a regular basis. I think a large part of the respect that he has — not just from fans, but also the racing community in general — comes from that ability in itself.

When it comes to the question of whether it’s the car or the driver, there’s always a balance. But other things come into play, too.

I’m asked all the time what it’s like to have a teammate, mostly because people look at other sports, and can’t really fathom it. Imagine if Tom Brady and Peyton Manning were on the same team, and still competing against each other, too. It doesn’t make a lot of sense, but that’s kind of how racing is. (Not that Joey and I are Tom Brady or Peyton Manning, but you get the picture.)

So how and why do we do it? The answer is this: The good outweighs the bad.

The bad news is that Tom Brady is sharing a playbook with Peyton Manning, so they know each other’s plays, and pretty much know what the other one is going to do when they’re on the field together. That’s the bad part. 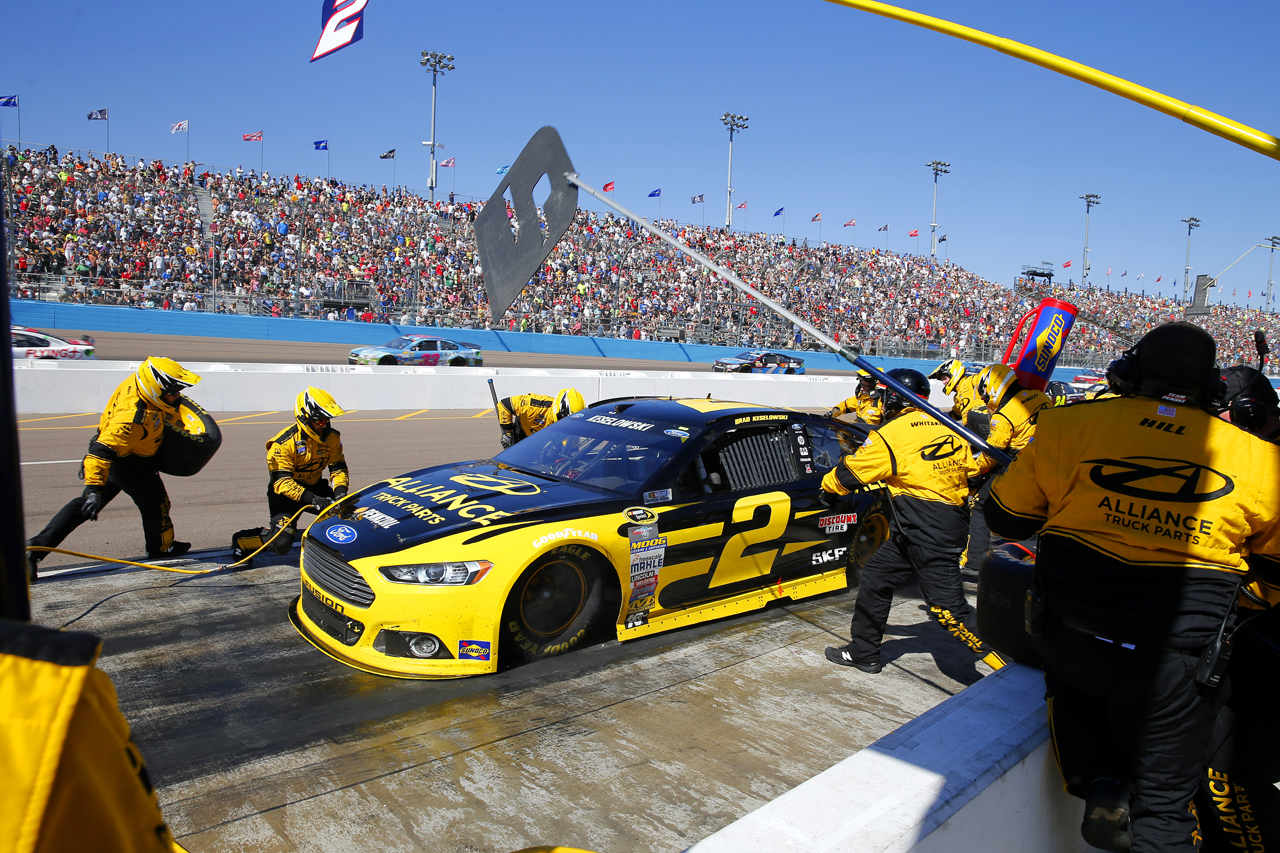 EVERY MEMBER OF THE 2 CREW PLAYS A ROLE IN OUR SUCCESS OR FAILURE ON A GIVEN RACE WEEKEND.

The good part is that they can work together to develop a better playbook. Peyton can take all of Tom’s best plays. Tom can take all of Peyton’s best plays. In NASCAR terms, both teammates can develop their cars together. By sharing information, you both get better than you were before. You take both of your 10th-place cars, and try to turn them into fifth-place cars or better.

Of course, a team’s crew has an interesting relationship to both the car and the driver. The crew chief is like an extension of the car, hands down. So are the mechanics. It’s their job to find every bit of speed and reliability out of the car they can. The pit crew, to use another comparison to football, is kind of like special teams. They’re almost a bridge between the car and driver. And your spotter is almost like a defensive player, out there to make sure that the car and driver stay safe.

Clearly, the effectiveness of a team has a hand in the performance of the car and the driver.

There’s one last thing that has a pretty significant role in answering whether cars or drivers win races: the NASCAR rules.

There’s always debates on rule changes. What goes hand in hand with this conversation about the cars being easier to drive by themselves today than they ever have been is this: It opens it up for more drivers to have an opportunity to win. It’s gotten to this point because of our fans.

As a driver, I can appreciate when all of the phases of a race comes together for a team, and the team dominates. But fans don’t like races where one driver dominates. Fans like seeing different guys win every week. It’s always been that way, and as a fan, I understand where they’re coming from, too. So NASCAR has evolved the rule packages in an effort to try to make sure that’s the case. And the easiest way for them to do so is to make the cars easier to drive, at least by themselves.

What’s also interesting is that rule packages really only favor the top 20 or 25 teams. The lower teams are already at a pretty significant developmental disadvantage. 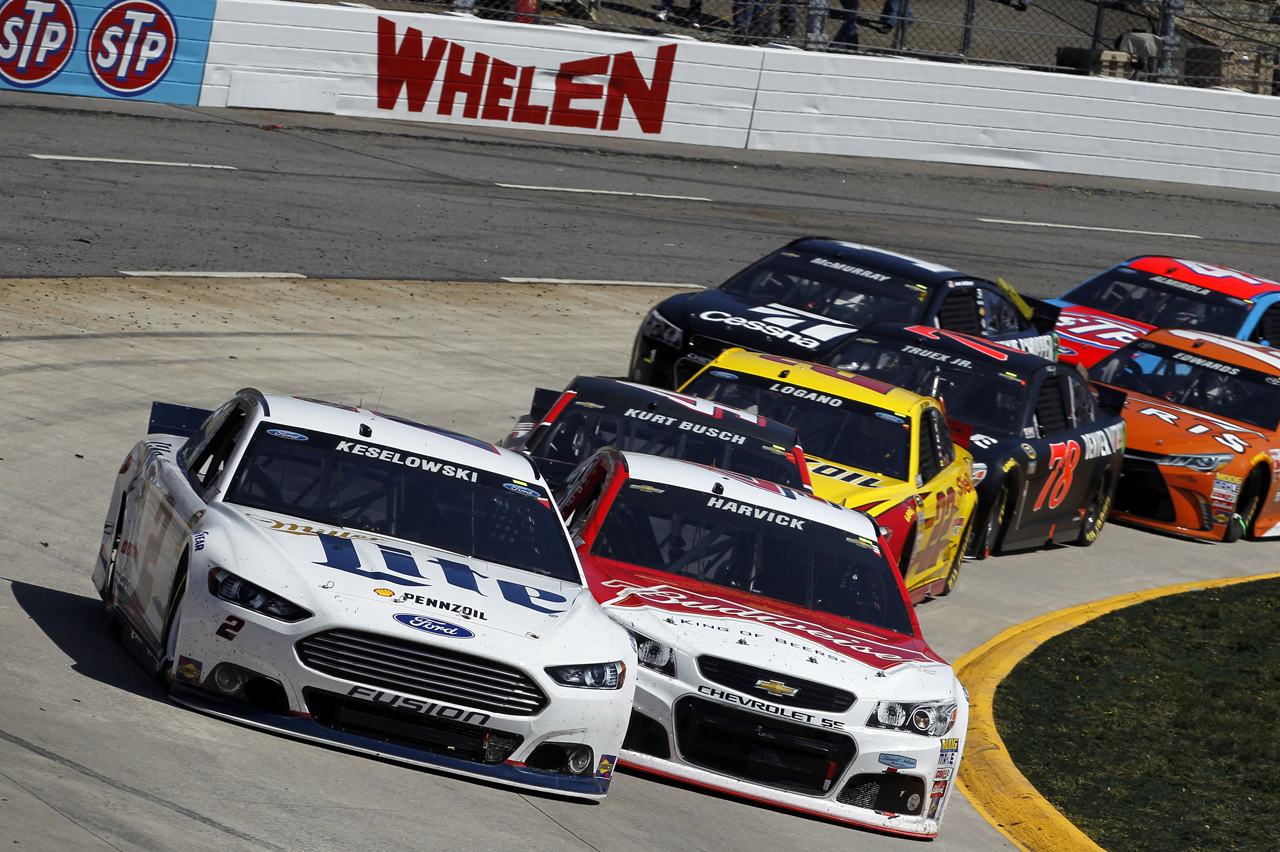 AS DRIVERS, OUR GOAL IS TO DOMINATE RACES AND WIN. NASCAR’S GOAL IS TO KEEP THINGS COMPETITIVE.

To illustrate this point, picture a NASCAR draft where the worst finishing teams pick in order — from worst upward — like it works in other sports. If I was the first overall pick and I went to the worst team in NASCAR, I would finish 20th or worse in points. Pretty much every one of the top five picks in the draft would finish 20th or worse in points. If you were lucky enough to get picked by, say, the 15th worst team, maybe it would turn out to be an outlier that could run in the top 10 for the season. But that team still isn’t winning a championship.

The worst running teams also have to deal with other obstacles. If you’re in the bottom tier for points, your car gets inspected last every weekend. Usually, the penalty for that is you’re not ready to go when practice starts because your car is still half taken apart from inspection. And there are financial penalties for being on bad teams, too. If you finish below 35th in points, you don’t receive any TV money.

That makes things pretty hard on a car and a driver, too.

So I’ve kind of laid my argument out there. What wins races — cars or drivers? To me, the answer is yes. Both matter, along with a lot of other things. And honestly, that’s the way NASCAR wants it. The more variables that go into winning, the more things can affect the outcome of a race. And with all those extra factors coming into play, more drivers can win.

I’m curious to hear what you think. When it comes to winning, what matters more to you: the car or the driver, and why? Post your answers to me on Twitter and Facebook with #CarOrDriver, and we’ll get this conversation started.