The State of the 2

The funny thing about this blog is that when I first thought of writing it, I didn’t think we were going to be coming off two straight wins. I think it’s important to acknowledge that. My plan originally was just to take stock of where we were at this point of the season.

So here we are.

The state of the No. 2 Nation is very, very good right now. Generally speaking, I’m thrilled where I’m at professionally and personally.

Let’s get into it.

From a professional perspective, I don’t think it gets any better than being the Chase Grid leader and having the most wins. That feels pretty good.

Things are clicking, that’s for sure, and the results are indicative of that. I don’t think there’s really just one thing that’s the cause of it. It’s everything.

At Daytona a couple weeks back, I think we probably had the best car. That comes from the team effort that everyone at Penske put in to turn around and build a much better car than what we had at Daytona in the spring for the 500. This time, during the race at Daytona, we also executed at a very high level. My spotter did a good job, and so did the pit crew. Paul did a good job with the strategy. I made some good moves. All of those things came together. 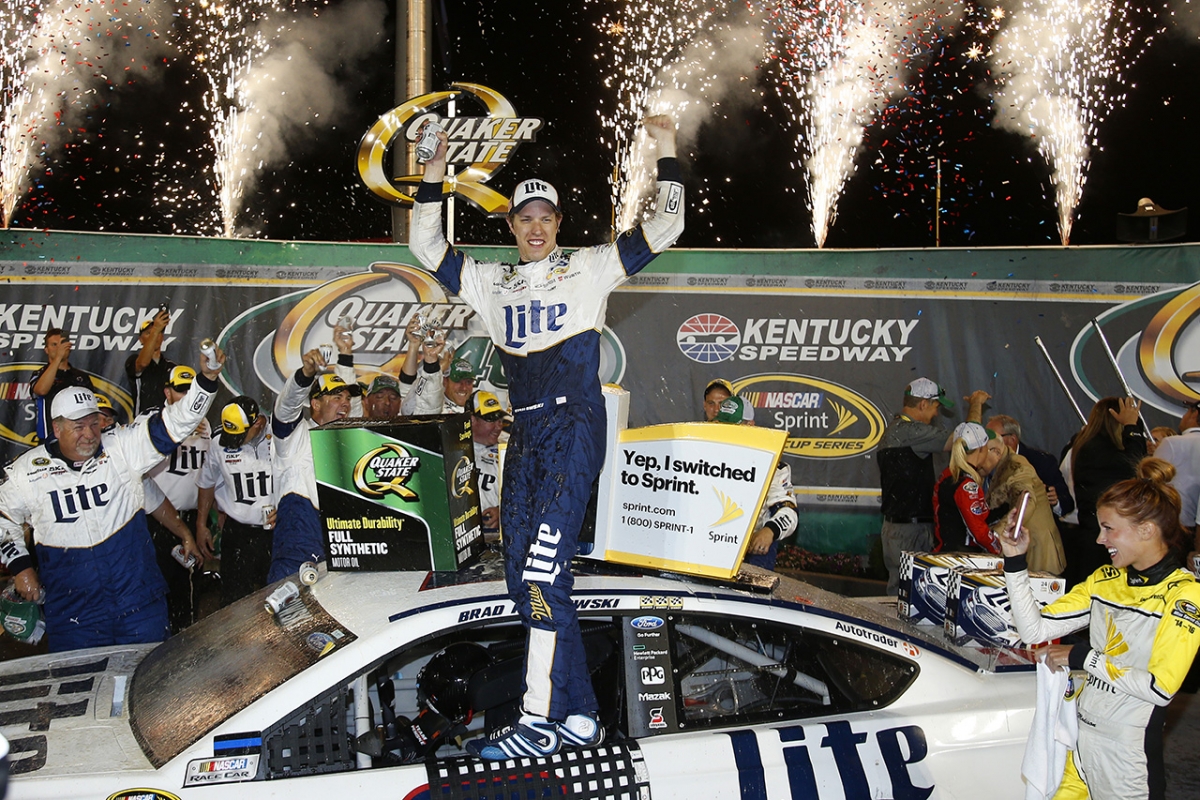 During the season, I don’t think it gets any better than being the Chase Grid leader and having the most wins. That feels pretty good.

When I look at Kentucky, we were probably not the best car. We were probably a fourth or fifth place car, but then again, that isn’t something that should get overshadowed. The thing about having a fifth place car is that on any given weekend, things can go your way, and you can win. That’s a big reason why we’ve been in the top five for the past seven or eight weeks.

Taking a look at the team as a whole, I’m really happy with our progress. The pit crew is a relatively young bunch. We turned over most of the crew after we won the championship in 2012, and spent a year or two not really where we wanted to be. But now we’re becoming one of the top five teams on pit road, and that feels really good. With a little bit of time, I think we can become one of the best teams on pit road, if not the best. The chemistry is great. My communication with my crew chief, Paul Wolfe, is at a really high level right now. If I understood how we got to this point, I would have done it sooner. It’s sort of like sitting at the blackjack table, playing four hands and having them all hit. You take it, and enjoy it while you’ve got it.

Personally, I feel good about my work behind the wheel. The cars are fast and I’m driving with a lot of confidence. Those things always go together for a race car driver.

When I think about the NASCAR season so far—not just about our team, but in terms of the sport in general—there are few things that stand out to me.

For one thing, I like the changes NASCAR made to the cars. They’re a bit racier around each other, which has allowed drivers to the showcase their talent to a larger degree. That’s a good thing.

Somewhat related to that is collaboration that’s been happening in the sport this season, which has gotten a lot of attention of from the media. The drivers’ council has done a number of good things. The rules packages have been the most noticeable, but there’s been other changes with track security, rules and regulations on restarts and so forth that have been very positive from a leadership perspective and the standpoint of collaboration, which has gotten a lot of attention from the media—the driver’s council and so forth. It’s a huge step in the right direction, and I’m glad to be part of it. I think the sport’s really headed down a positive path that won’t be fully realized for another five to 10 years.

Finally, one of the biggest challenges we have is with our changing fan base. Baby boomers aren’t getting any younger. Millennials are our next generation of fans. They’re harder to attract to any sport. Attracting those fans is a key challenge for us ahead.

One thing I’ve done a lot of this season is work in the broadcast booth. I enjoy it, but it’s more than that. Motorsports has done so much for me. NASCAR has done so much for me. I take from the sport — money, trophies, fame, and so forth. And for that reason, I want to give back. At some point, I feel it’s every driver’s role to plant new seeds—whether that’s through the truck series, or teams or the broadcast booth.

Speaking of truck teams: I’m really proud of what BKR has done so far this season. We’ve been so close to winning truck races. Our drivers are still in the hunt for that first team championship, and looking to make a strong run over the next few weeks. 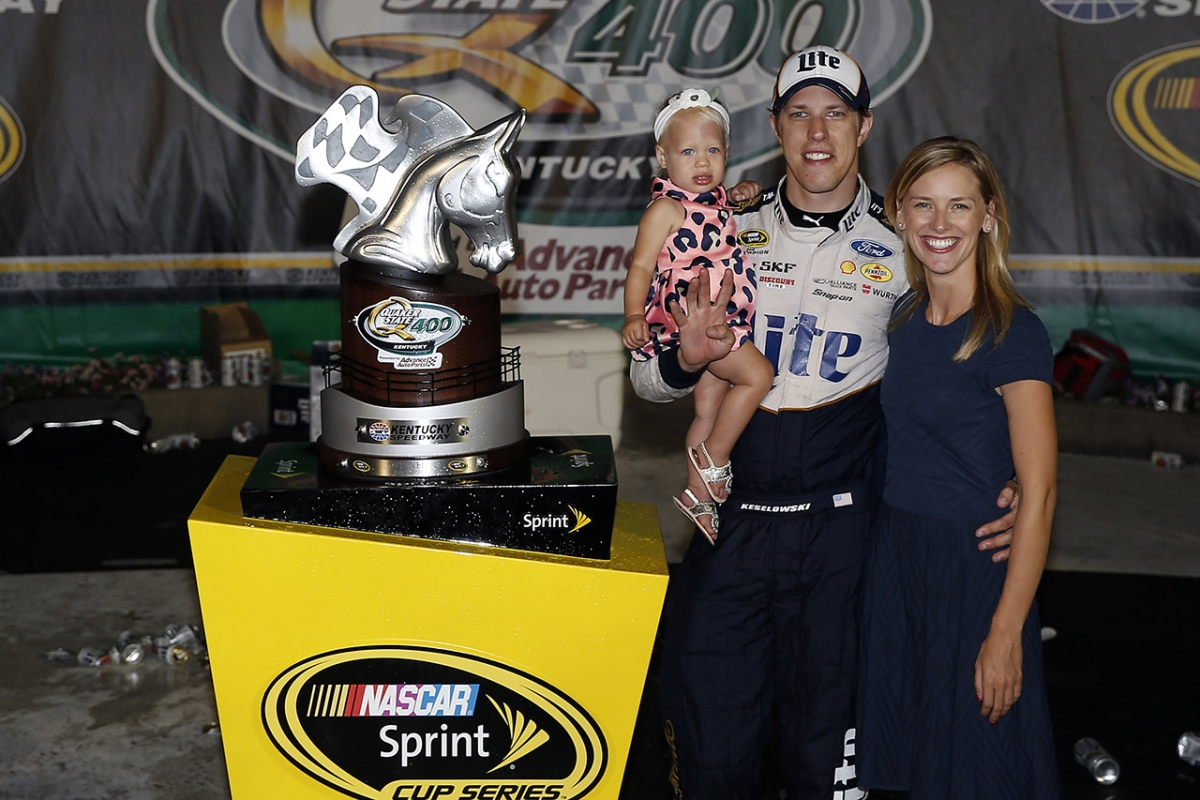 Winning feels a lot more complete when you have a family to share it with.

When you win, no one can say anything, and winning feels a lot more complete when you have a family to share it with. And when you’re lucky enough to be with someone like Paige, things are that much better. I’ve never been happier than I’ve been with her, and feel blessed to have our family.

A pretty big change this year has been having our daughter, Scarlett, more visible at races. I was nervous about a number of things with respect to Scarlett, and I still am. (I think that’s part of being a parent.) My biggest worry is people who don’t like me taking it out on her. I’m still nervous about that. Any time I have a bad race and someone sees me with my daughter before it, I feel like people want to point the finger at her. As a dad, that’s the last thing I want her exposed to. I don’t want Paige exposed to that, either.

But because we’ve had a successful year, it’s made me more comfortable having Scarlett involved in functions where she’s visible.

HEADING TO THE CHASE

So how do we keep the intensity up as we head toward the Chase? There’s no easy answer. You have to keep developing your car. You can’t rest on your laurels.

You have to understand that everyone else is going to get better when the Chase starts. The two Stewart-Haas cars — the No. 4 of Kevin Harvick and No. 41 of Kurt Busch —  are first and third in points for a reason, and that’s because they’re good, consistent performers. I expect my teammate, Joey Logano, to perform really well during the playoffs. All the Gibbs cars have been good all year long, and the No. 48 always manages to find another gear in the Chase. The championship is going to run through those cars.

With that belief structure, you can look at where you’re at, and know that you have to continue to improve to stay on top.

It’s very easy to get baited into saving yourself, saving your car, saving your team for the Chase, but I don’t feel right about that. I feel I need to push the whole time. I feel good about myself as a person and race car driver when I push hard the whole year, and my goal, of course, is to win the championship. But that doesn’t mean I’m going lay up and not go for race wins because they don’t mean as much this time of year.

In fact, to me—at least in one way— race wins mean everything.

Even though we didn’t win the championship again in 2014, it felt like another championship season to me. It felt good in my heart. I’ve always subscribed to the belief that in motorsports, especially when you add in all these special rules with respect to playoffs, the Chase, and the randomness that can go with it, the only way you can really tell who the best team was is who had the most wins. In motorsports, you compete against everybody every week. That’s totally different from every other sport. There are no hollow or easy wins.

The year reminds me a lot of 2012 and 2014. I feel like we’re having a championship caliber season. I’m going to do everything I can to win my second championship, but no matter what happens, the driver who wins the most races— whether it’s me or someone else—will be the best driver, as far as I’m concerned. 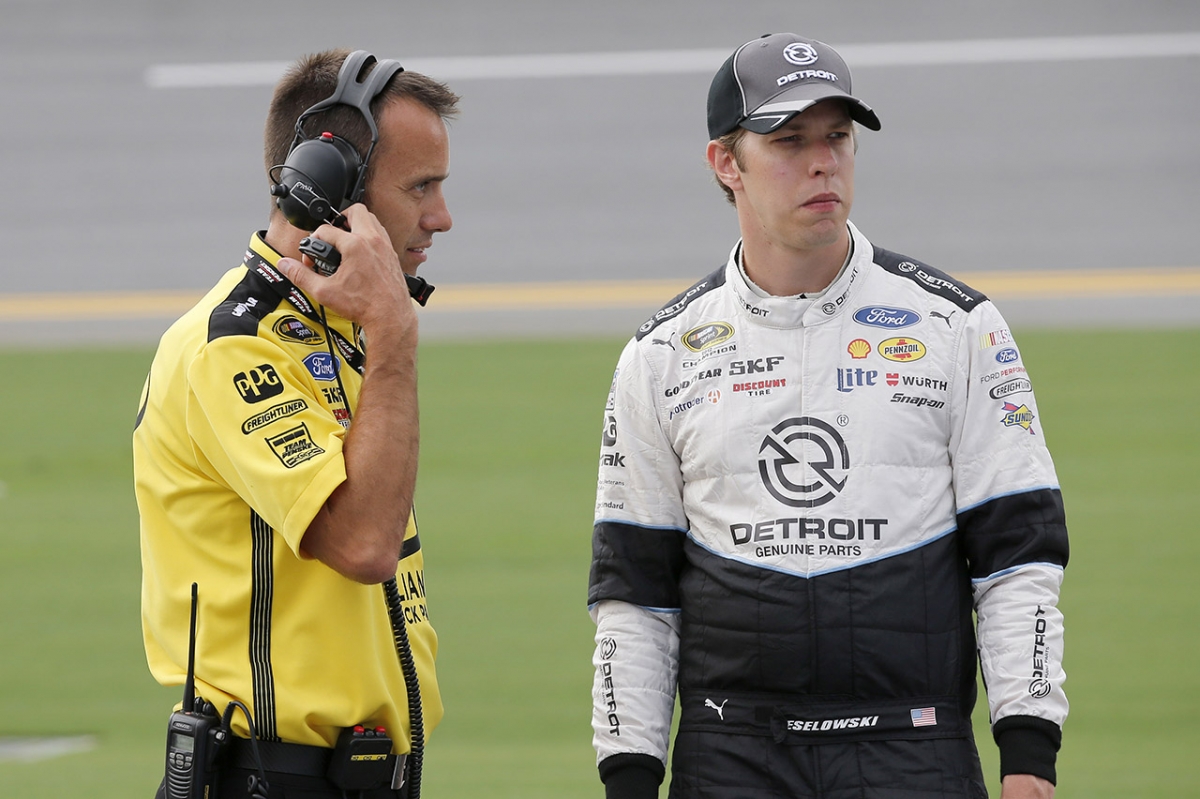 So how do we keep the intensity up as we head toward the Chase? There’s no easy answer.

In motorsports, we don’t have hometowns the way that teams do in other sports, and because of that, we don’t really have hometown fans in that way, either. What we have, though, is something that’s really unique.

Fans in motorsports tend to follow a kind of arc. In the beginning, when you’re new, people like you. You’re new, you’re fresh, you’re something different. Then you get somewhat established and continue to be successful, and people start to dislike you vehemently. Finally, when you reach the end of your career, you kind of reach that nostalgic stage, where you have fans who feel that you’re awesome because you’ve been around for 20 years. (Never mind that 10 years ago, they didn’t like you.) Rusty Wallace, Darrell Waltrip, Jeff Gordon—all of them were booed at the midpoint of their careers, and then cheered at the end.

It’s a funny dynamic that’s accentuated in racing more than in any other sports.

I’m in the middle part. Last weekend at Kentucky, the fans were really polarized. There were those there who absolutely hated me, and they made themselves known. (That’s OK. I don’t race for popularity.) But when I was driving through the infield, getting ready to do introductions for the race, I noticed that a good percentage of the crowd was wearing my stuff, and I was like, “Wow, this is really cool. This is kind of thrilling.”

Those guys are die-hard fans of mine.

I would be remiss if I didn’t acknowledge those die-hard fans of mine. You’re the really special fans. Many years from now, when I decide to retire, I’ll know that all of you were really there with me from beginning. And as we head toward the latter part of the season, I just wanted to say thank you for that. I know you catch a little bit of hell from time to time from people who aren’t fans of mine. Thank you for being there for me, and the rest of the #2Crew.