It’s been a little while since Colin Kaepernick started his ongoing protest during the national anthem, and since then it’s created a fair amount of controversy. Some people agree with what he did. Others are against it. A lot of people kind of fall in between. It’s generated a lot of conversation, too, and it’s certainly got me thinking.

In case you missed it, Colin started sitting during the national anthem in preseason games, then changed to kneeling. Here’s how he explained his protest the first time he was asked about it as reported by NFL.com:

“I am not going to stand up to show pride in a flag for a country that oppresses black people and people of color. To me, this is bigger than football and it would be selfish on my part to look the other way. There are bodies in the street and people getting paid leave and getting away with murder.”

When it first happened, my immediate response was that I recognized Colin’s right to do what he was doing, but I also felt that what he was doing really rubbed me the wrong way for a variety of reasons. I posted the following on Twitter:

I accept his right not to stand. Hope he respects mine and other's rights to think poorly of him. https://t.co/BckEiNct9r

Since that time, I’ve continued to read and listen to what other people are saying, and it’s been incredibly instructive and educational. It’s also gotten me thinking about what an athlete’s obligation to speak out for truth is, and what the most productive ways are for doing that. I don’t have all the answers, but I do want to share what I’ve been thinking, and maybe help move the conversation along.

When it comes to an athlete’s role in politics and social issues, it can get real tricky really fast.

A lot of people try to escape from the outside world through sports. So we have to always be cognizant of that as an athlete. And I think it’s important not to force-feed politics to our fans, because we have to remember why they’re there. At the same time, I don’t think that means we can deny truth or ignore important things that are happening. It’s an extremely tough line to walk, and quite honestly, I don’t know if there are many athletes, including me, who really have handled it all that well, or to everyone’s satisfaction.

To be overly involved is forgetting your day job. To not be involved is a tremendous waste.

There’s a principle that I learned about at church in the past year, and I’ve been thinking about it a lot lately in this very context. It’s called truth and grace, and what really appeals to me about it conceptually is just how universal it is. The basic concept is this: Grace cannot exist without truth, and truth cannot exist without grace. 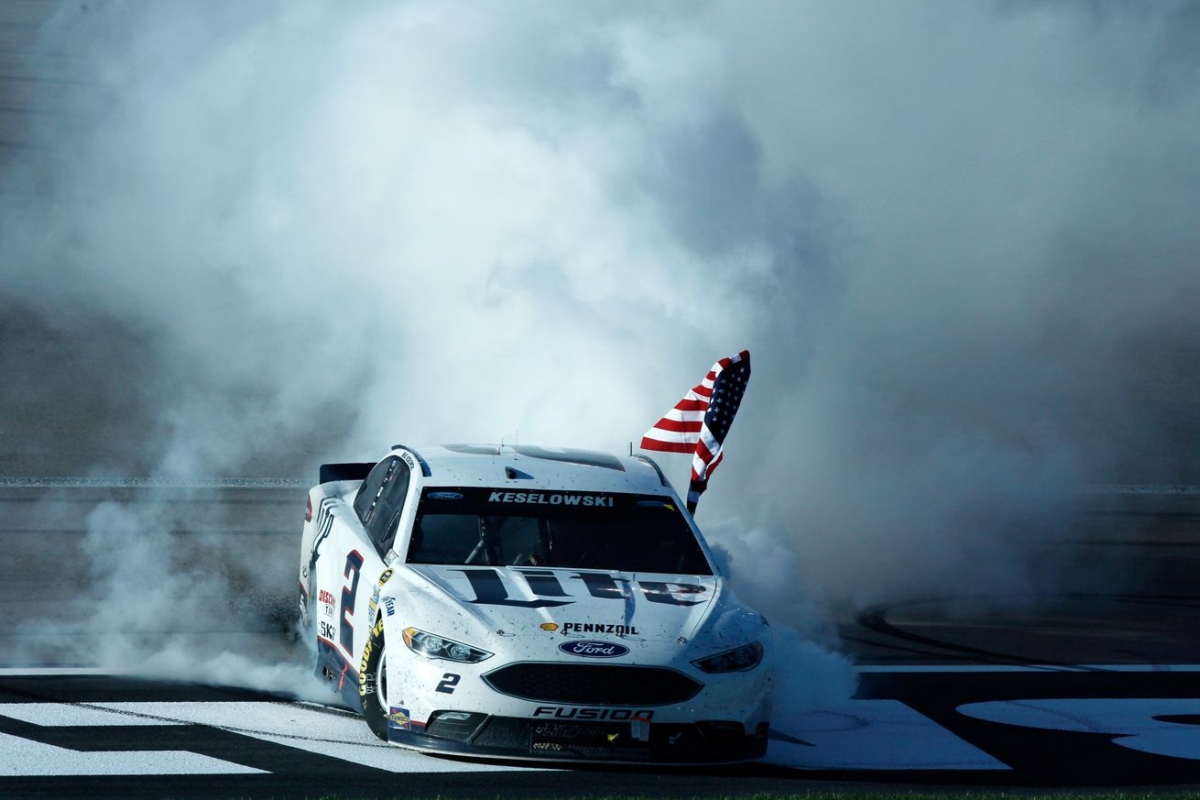 WHEN I WIN A RACE, I FLY THE FLAG TO REFLECT ON THE GREAT PRIVILEGE WE HAVE, MADE POSSIBLE BY THOSE WHO HAVE AND ARE WILLING TO GIVE THEIR OWN LIVES ON OUR COUNTRY’S BEHALF.

Feeling that we’re “right” about an issue—that we know the truth about it—isn’t enough. How we express the truths we believe toward other people matters because it’s ultimately what allows them to listen to what we have to say, to be empathetic, and either to take it to heart or disagree with it (hopefully, in a respectful way). If you tell someone that they’re doing something wrong and that they’re an idiot or that you hate them because of it, they’re probably not going to hear you, or change their behavior.

Chances are, they’re going to respond in pretty much the same way.

The reason that the idea of truth and grace is so compelling to me is because it’s something I’ve struggled with. It’s a very rare skill set, to have both grace and truth at the same time. It isn’t one that comes naturally to me. I don’t always do a great job of following the principle. I’m very much guilty in my life and career of not carrying myself with truth and grace, and I’d be a tremendous hypocrite if I didn’t acknowledge that. But it’s something I’ve been really trying to work on. That’s one of the reasons I love having a blog. It gives me a chance to keep turning ideas over and over in my mind, and eventually, try to express them with grace.

When we talk about Colin’s protest and the truths about racism in our country, it’s clear to me there’s truth in where he’s coming from. America is supposed to promise the same constitutional rights to everyone, and clearly, that’s not always the case. Racism and prejudice continue to exist.

To what degree is that true? I don’t know—I’m not sure anyone does—but I look at it this way. If we were talking about drunk driving, and you were the parent of a kid who had been killed by a drunk driver, you’d feel pretty strongly that drunk driving was still a problem, regardless of whether the number of drunk driving deaths had dropped over the past few decades or not.

That’s how a lot of people feel about racism in our country today.

My issue with Colin’s protest was not in the truth of his position. There’s no part of me trying to deny that. But I do have an issue with how he expressed himself, and I’ll explain why.

The singing of the national anthem, the flag, the presenting of colors—they’re more than just symbols to a lot of people in the military, especially those who are currently serving. Many of those people are going through hell. That moment before a sporting event where the national anthem is sung is a moment where I think members of the military feel like everybody cares about their suffering. It holds deep meaning for them. That’s important. I have a tremendous amount of respect for what those people go through.

I also think about Gold Star families—families who have actually lost a loved one in military service. I’ve met many of them through my foundation, and the singing of the national anthem is something that they really self-identify with. They’re remembering someone they loved who died, someone who was taken from them. It’s a time for them to share their passion and pride for their country, to remember the sacrifice made by their family member, and to feel like it was worth something.

To these people, along with many of our first responders like firefighters and policemen, sitting or kneeling during the national anthem flies in the face all of these sacrifices. It dishonors everything they’ve done and given while serving our nation.

That’s the thing about the protests that Colin has started. Yes, they’re drawing attention to an important, righteous cause, but it’s not happening in a vacuum. That’s not how it works. The way that Colin and others are staging these protests, they’re upsetting a lot of military families. Given what those families have done for all of us and the very real pain that many of them have felt, I not only understand where they’re coming from—I sympathize with them, too.

After reading a previous draft of this blog entry, a friend of mine passed along something he thought I should read. I’m glad he did. I’d never read it before, and it really made me think about all of this in a different way. One particular passage seemed especially relevant:

“I have earnestly opposed violent tension, but there is a type of constructive, nonviolent tension which is necessary for growth. Just as Socrates felt that it was necessary to create a tension in the mind so that individuals could rise from the bondage of myths and half truths to the unfettered realm of creative analysis and objective appraisal, so must we see the need for nonviolent gadflies to create the kind of tension in society that will help men rise from the dark depths of prejudice and racism to the majestic heights of understanding and brotherhood.”

Martin Luther King Jr. wrote that in his Letter from a Birmingham Jail in 1963, more than half a century ago. Similarly, Colin wanted to draw attention to racial injustice and police brutality—important issues that he felt were being ignored—and he picked a method for doing so that accomplished exactly that. A tension was created that made people uneasy, and they took notice in a way they almost certainly wouldn’t have otherwise.

What I don’t think Colin anticipated was that his actions would inadvertently hurt a group of people who don’t deserve to be hurt. And now that he does know that and has gotten everyone’s attention, I can’t help but feel that there’s a better, more productive way to effect change—like starting a foundation—than continuing to kneel during the anthem, or wearing socks that show pigs in police hats.

It gets back to the notion of truth and grace I mentioned earlier, and speaks to the heart of why grace matters so much.

Because instead of the majority of truth-minded people rallying to Colin’s cause to fight the real racial injustice we have in America, we have fragmented groups of people. We have people who see the truth in his protest, and can’t understand why people are upset by someone kneeling during the national anthem, especially to further an important cause. We have people who see the truth in Colin’s point of view, but who also are upset by the way his protest disrespects the military, first responders and our country. And we have people who have no interest in the truth anymore because they find the context of Colin’s protest so offensive.

There’s no shortage of people who want to deny truth. That’s existed throughout the history of mankind, and will continue to exist long after all of us are gone. That’s why it‘s so important to speak it. In life, you need to be honest with yourself if you’re going to grow.  There are real issues in our nation right now, and we need to be truthful with ourselves if we’re going to progress.

May we all find the truth and grace to move our country forward.