The road to a second straight win for Brad Keselowski and the 2 Crew came down to a fierce battle between Team Penske teammates in fast Ford Mustangs.

But one week after Brad claimed victory at Atlanta, it was Joey Logano who secured the win at Las Vegas Motor Speedway in the Pennzoil 400, as BK’s last lap effort to slide the No. 2 car past Logano’s 22 came up just a little short. He settled for a second place finish and after the race, Brad talked about the competitive runs between he and his teammate all afternoon.

“The Discount Tire Ford Mustang was really strong. I thought it was a pretty good race. I passed Joey with the lapped traffic, caught a break there, and then lapped traffic cost me the lead to Joey. He pulled a good slide job, and I tried to pull it back and I was just a touch too nice to him,” Brad said with a smile. “It’s all right. It was a really good day. I’m really happy for Team Penske and our team.”

When NASCAR on FOX’s Jamie Little asked BK if one more lap would have gotten him past Logano to pick up his second straight win, BK grinned and said “I’d sure like to find out.”

Could @keselowski have caught @joeylogano if given one more lap?

He sure did want to find out! pic.twitter.com/80tdHOVKFO

Much of Sunday’s race came down to that teammate battle, as both Keselowski and Logano showed the speed in their Mustangs, after starting the day in the middle of the pack. BK began the afternoon in P19, but it didn’t take him long to crack the Top 10.

Crew chief Paul Wolfe kept Brad on the track while most of the leaders pitted under green, in an attempt to gain track position, but when a caution never came, BK was forced to take the Deuce down under green at Lap 59. Brad then raced back to P10 at the end of Stage 1.

It was then that Wolfe used an even bolder pit strategy — counting on the ripple effect of bringing Brad down later in the first run and having less wear on his tires — to get the No. 2 car to the front of the field. During the stage break, while the field took four tires, the 2 Crew went with just right side tires and BK came off pit road in P1 and started Stage 2 from the front. 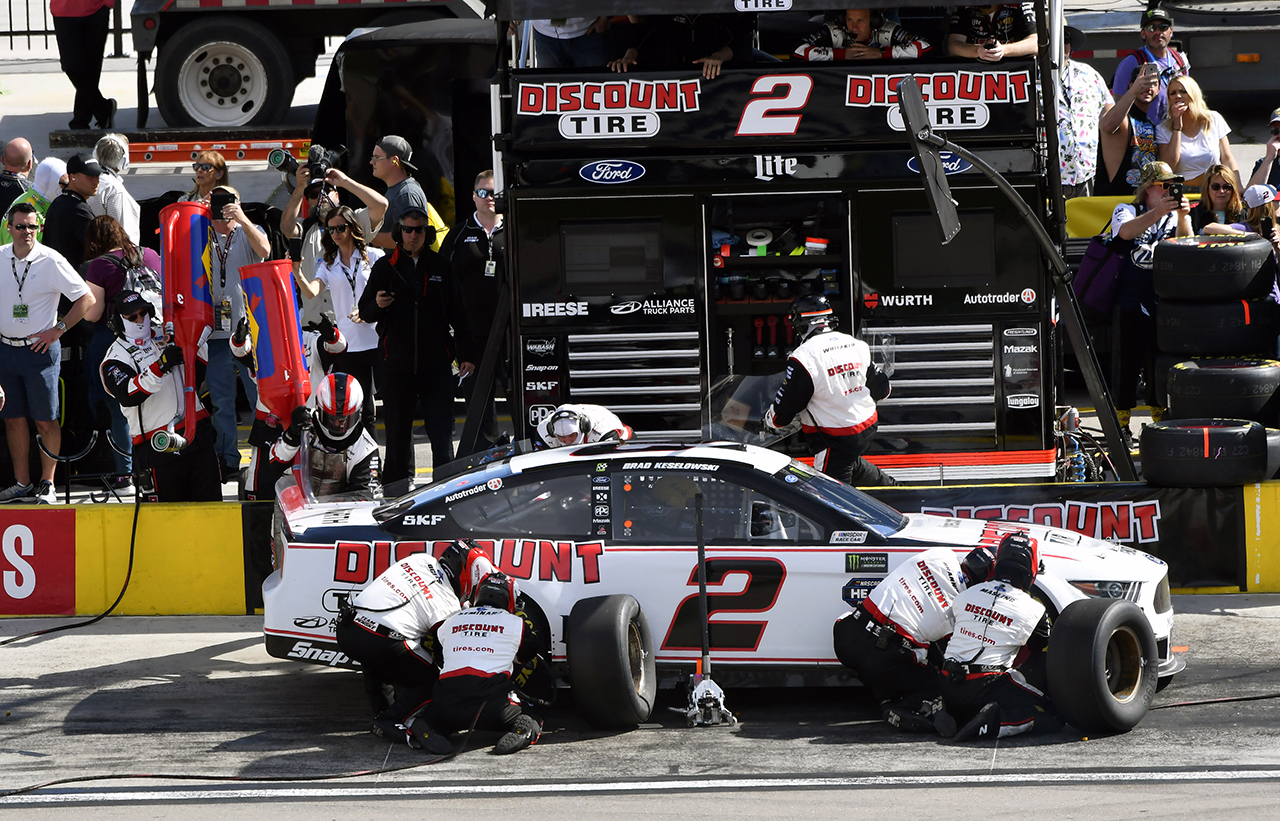 Brad kept the No. 2 car at the front for the first several laps of the stage, but eventually, his Mustang developed a tight condition in the center of the corner and BK had to cede the lead to Logano for the first time. The 2 Crew elected to pit under green from P7 at Lap 124 and Brad again rallied after his green flag stop, racing up to P4 by the end of Stage 2. After a full four-tire stop during the stage break, he fell into P6 to start the final stage of the day.

Like the stages before it, the race went green for the duration without a single caution. Brad pushed from sixth up to third position by the time he had to head down pit road for his last stop at Lap 215. As pit stops cycled through, BK made his push for the lead. He passed Kevin Harvick with 40 to go and from there, set his sights on the leader Logano.

As the No. 22 car of Logano caught lapped traffic on Lap 240, Brad made his move, with a slide job to get ahead of his teammate and take the lead. But Logano wouldn’t go quietly. Just four laps later, as BK dealt with more lapped cars, Logano paid him back with a similar move to take back the top spot.

“It really seemed to come down to what the lapped cars were going to do,” Brad said after the race. “If they messed with the leader then the second-place guy would get a really good run, and that just kept happening over and over again.”

Logano started to pull away from there, but BK had one final charge in him over the final few laps, closing a gap of nearly a second with 10 laps to go down to a few car lengths in the last lap. Brad made his bold move for the win in Turn 3, diving low to get a run on the 22 going into Turn 4. With that, he was at Logano’s side, looking to use another slide job to claim the win, but Logano just barely edged him to the corner as BK checked in behind him and settled for the P2 finish.

“It was a good battle. We were both fighting really hard for the top lane,” Brad said. “It was a pretty good day for our Discount Tire team and for Team Penske.”

With the second place finish, plus stage points, Brad earned a season-high 43 points on Sunday, bringing his total for the season to 115, good for fifth, just 18 back of Logano for first.

NASCAR Goes West continues with a trip to ISM Raceway in Phoenix on the slate for this weekend. Sunday’s TicketGuardian500 is scheduled to start at 3:30 pm ET and can be seen on FOX.