MOORESVILLE, N.C. – Eunice Eckard wears a delicate chain around her neck that holds a small, round emblem with a gold star on it. She wears it every day — except when she “had an X-Ray one time” — and even keeps it on to sleep.

It’s important to keep it close, because the gold star represents her son, United States Marine Corps Gunnery Sergeant Chris Eckard, who was killed on Feb. 20, 2010 while conducting EOD operations in Afghanistan.

“When Chris went into the military, his first deployment was a … blue star,” Eckard said, also wearing a picture of her son on her shirt. “And we hung the blue star flag in my living room window. This started back probably the first war – if a family member shipped out, they put up a blue star. And after how many (deployments they were) gone, that’s how many stars you hung up.

“Well, I had one. If they don’t come home (from deployment), you take the blue down, put up a gold. And that’s what this is. I’m a gold star mom.”

GySgt Eckard’s name will adorn the windshield of Brad Keselowski’s No. 2 Team Penske Ford in this weekend’s Coca-Cola 600 (Sunday, May 27, 6 p.m., FOX). As part of the NASCAR Salutes program, every Monster Energy NASCAR Cup Series driver will have the name of a fallen serviceman on their car windshields. The connection with the No. 2 team and the Eckard family is one that is personal, however; the team’s chassis fabricator Casey Mahoney grew up with GySgt Eckard in nearby Hickory, North Carolina and came to Keselowski with the idea to honor his childhood best friend in a special way.

The No. 2 driver, who has long served as a strong military supporter, immediately was on board.

“This program has existed here for a number of years in NASCAR for the Coke 600 where we get to honor the fallen soldiers,” Keselowski told NASCAR.com. “But it means more to us and it just hits a little bit harder when there’s a personal connection and the personal connection inside Team Penske with family and friends runs deep for that family …

“I’ve always loved the military, I like the discipline, just the ethics. I like, obviously, the freedoms that they enable and I always thought if I didn’t make it in racing, it was something I wanted to do. I’m thankful I made it in racing because I’m not sure I’d be very good at it. I (want) to show my respects to those who have gone out there and choose to serve and even furthermore, those who have made the ultimate sacrifice while serving.”

Keselowski met Eunice Eckard and her other son Chad Eckard at the Mooresville, North Carolina-based Team Penske shop on Wednesday morning. He visited with the duo before giving them a full shop tour, showing them the chassis and machine shops and telling them about the different race cars on the shop floor. 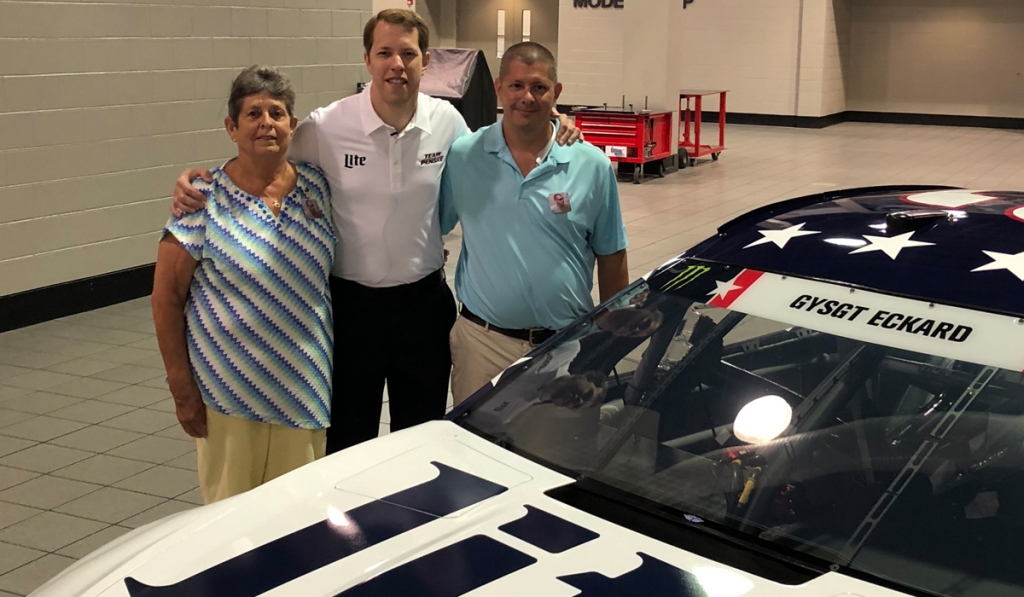 He also presented them with a No. 2 team shirt, which the Eckards said will be the first NASCAR item in a room in Eunice Eckard’s house that honors her son. A carport-turned-sunroom is now “Chris’ room.” It’s where his family keeps his framed dress blues, flags, a Carolina Panthers helmet honoring him and it’s where GySgt Eckard’s young children can look at photos of their father.

“I think he’d be proud of things that we’ve been able to do to keep his name alive,” Chad Eckard said. “Not only just for Chris or mom and I, but I hope that by keeping his name alive, when his children get old enough, they’ll be able to see how great their father was.”

The chance to honor a member of the armed forces and his family is special for Keselowski. He hosts military families at the track, works with the armed forces through his military-focused Checkered Flag Foundation and even holds an American flag while doing his winning burnouts.

Honoring the GySgt Eckard is a small gesture to give back to those who paid the ultimate sacrifice, he said.

“When you hear the stories and you talk to the family, all you can think about is you wish you could fix it, you wish you could change the way things went, but you can’t,” Keselowski said. “So all you can really do is honor and remember and we get that privilege and honor to do that this weekend with Coke 600 with this (NASCAR) Salutes program.”

For Mahoney, his own team honoring his best friend in a public fashion is special. Mahoney and GySgt Eckard were staples at each others’ houses often growing up and each served as the best man in each other’s wedding. Eunice Eckard called him her “adopted son” and Mahoney referred to her as his “second mom.”

Marriage and children made their visits less frequent, but no less meaningful, he said.

He still remembers the day he got the call that his best friend had been killed overseas: “I could feel the color just drain out of me. I was just kind of numb …” he said.

“I feel really blessed to be able to be a small part to be honor Chris in this way. To just be able to honor him in a small way but at the same time get him a lot of exposure to who he was and the kind of person he was is a really big deal to me.”

The idea of the No. 2 Ford going to Victory Lane Sunday with GySgt Eckard’s name on it would trigger emotions that Chad Eckard “can’t even begin to describe.

“Having Chris’ name in the Winner’s Circle in such an honorable fashion in front of national audience, it just doesn’t get any bigger,” he said. “I don’t know if I’d be crying tears of happy or tears of, I don’t know.”