In eight years, Eunice Eckard has taken it off exactly one time — an X-ray technician wouldn’t let her hold it in her mouth as usual — but that’s it. It’s always there otherwise. That delicate chain, plus a diamond earring and a Gold Star.

The earring is from a pair her late husband, Steven, gave her on their wedding anniversary. When she lost the matching one, someone offered to buy a replacement pair.

Instead, she converted it into a charm for her necklace — and now wherever she goes, Steven’s right there with her. 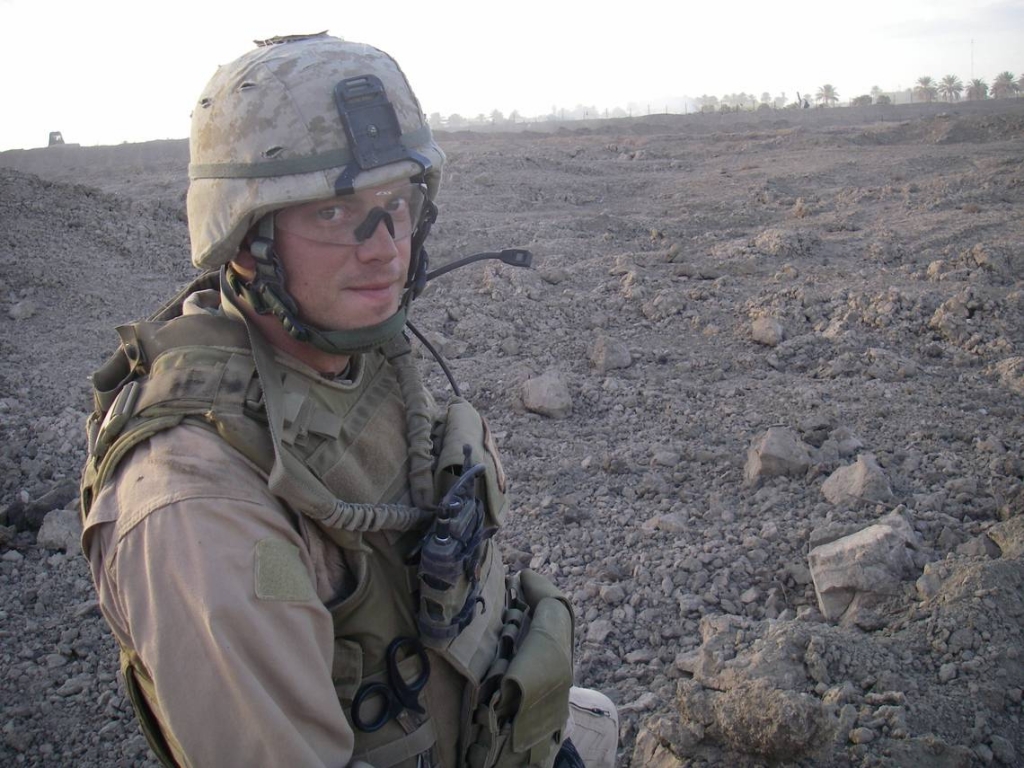 “My grandchildren say, ‘How do you sleep with that on?’ But it don’t bother me one bit,” Eunice says now. “(The Gold Star) came as a pin, but I didn’t want to wear a pin everyday, so I put it on my special necklace. I wear it every day.

“It stays with me all the time.”

But that isn’t the only way Eunice remembers Chris, a gunnery sergeant who was killed during a 2010 tour of duty in Afghanistan. It’s by spreading his name, by keeping his story alive, as will be the case this Memorial Day weekend during the Coca-Cola 600 at Charlotte Motor Speedway.

Chris’ name will be front and center on Brad Keselowski’s windshield for the race, with stars and stripes adorning the rest of the car.

It’s as perfect a ride as you could dream up for Chris, who made the ultimate sacrifice in the name of those same stars and stripes.

“Anything we can do to keep not only Chris, but any soldier’s name or memory alive, with the sacrifices they have made, it means everything,” Chad Eckard, Chris’ older brother, says. “I’m sure he’d be saying, ‘No, don’t do this for me, I am no different from those other guys over there doing the same job I’m doing,’ but I know he would have been appreciative of it.

“I hope some other families can take something, some encouragement from this … that’s what this weekend is about.”

The first thing you need to know about Chris Eckard, even before he joined the military, is how much he loved his country.

Take, for instance, when he was still in high school. A service station near his home in Hickory had a large, tattered American flag flying in the wind.

That wasn’t up to Chris’ standards.

“Chris looked ’em up in the phone book,” his mother says, “then called and said, ‘Look, this flag out here looks terrible. You should take it down and replace it.’

“Sure enough they did.”

Or how about the time when Chris was little, dreaming up ways to solve America’s problems. His imagination revealed itself with his trash elimination plan, where all the garbage would be strapped to rocket ships and shot into space. Chris even wrote then-President George H.W. Bush to share the plan.

And of course, the president wrote him back.

The point is, Chris Eckard loved his country. He’d do whatever he could for the United States and the American people. That blood ran in his family, as both his father and his uncle served in the Navy. Maybe that’s why, even from a young age, he was dead set on joining the Marines.

“When he was talking to recruiters, he wouldn’t even talk to anyone else. He wanted to go to the Marines. Just Marines,” Eunice says. “I’m thinking, ‘No, no no no no. Go to the Air Force at least, that’s the safest.’

“But he was good. Top of his class, no demerits ever.”

By the time Chris graduated high school, he’d already grown from the little boy with a pellet gun in the backyard woods into a ready-made soldier. He immediately joined the Army National Guard in 1998, where he remained until 2001.

Then it was time to fulfill his life’s dream: becoming a Marine.

Chris attended boot camp at Parris Islandin South Carolina before moving to Marine combat training in Jacksonville, N.C., and ultimately to combat engineer school at Camp Lejeune. He completed two deployments as a combat engineer, one with special forces in 2002 and the other to Fallujah, Iraq, in 2004, before returning home.

“I didn’t want him to keep re-enlisting,” Eunice says, “and he says, ‘Well, Mama, what better way to die than to die for your country?’”

So when Chris returned home in 2004 and subsequently re-enlisted, this time he volunteered for a different position. This time, he would serve as an Explosive Ordnance Disposal (EOD) technician.

Basically, he volunteered to defuse bombs. One wrong move, and a bomb will explode right from under an EOD tech’s feet. And if that wasn’t enough, their highly valuable work — they clear paths for other soldiers, as well as Afghan and Iraqi civilians — makes them prized targets among enemy soldiers.

Over the course of his service, it is estimated Chris defused between 300 and 400 explosive devices.

“He knew it was a dangerous job,” Chad says. “And he knew that with the military, there’s only two ways out, either retire, or die. He kind of just lived by that rule.”

After Chris completed EOD school (top of his class, naturally), he deployed three separate times: to Ramadi, Iraq, in the summer of 2007, then back to Fallujah in the summer of 2008, and then to Afghanistan in the fall of 2009. In addition to his mother and brother, every time he’d leave behind his wife, Ashley, whom he married in 2001 after meeting at a J.C. Penney. The last few times, he left behind his sons, Steven and Avery, too.

“When you see him getting on that helicopter (to leave), you’re thinking, ‘Could this be it?'” Chad says. “And of course when he came back, it was just overwhelming emotion of, ‘Thank God you’re home.'”

Only after that last deployment, Chris’ fifth in less than a decade, there was no return helicopter.

‘They’re at your mom’s house’

Chad Eckard still remembers exactly where he was.

It was Feb. 20, 2010. He’d just finished work when Chris’ wife, Ashley, called. She was looking for Eunice. She had to tell her something.

Eunice was in Charlotte shopping with some family, but Chad could tell something was off with Ashley’s tone.

“I said, ‘What’s wrong with Chris?'” Chad recalls now, “and she said, ‘He was killed today. They’re at your mom’s house and they’re waiting on her.'”

Chad’s heart sank. He’d delivered bad news to his mother before — when his father, Steven, was killed in a car crash, the hospital called him first and he had to tell Eunice — but this was … different. His brother.

Chad called Eunice and told her she needed to come back home.

“The hardest thing I’ve ever done,” he says, “but you just have to be chipper — you can’t let her know that something’s wrong.

“You can’t say nothing else. You just can’t.”

“I knew. I knew why they were here,” she says. “Chris had told us that that’s what would happen if something happened (to him), they’d come to the house to tell us. So when I walked in and saw them standing, I knew.

“They didn’t even have to tell me. I knew. And I just broke down.”

A connection to Keselowski

Chris’ best friend growing up in Hickory was Casey Mahoney, whom he met at a fourth-grade birthday party. They became brothers for life.

They did everything together, from sloshing in the creeks near Chris’ house to sleeping over seemingly every night. Eunice became like a second mom to Casey, and Casey a second brother to Chris. Even as Chris deployed over and over again, they remained the best of friends, even serving as the best man in each other’s wedding.

“We were the kind of friends where … we may not see each other for a year,” Mahoney says, “but the minute you get back together, it’s like you never missed a day.”

When Mahoney learned of Chris’ death, he too took days to grieve and get out his anger. His best friend, his best man.

Mahoney eventually became a chassis fabricator for Keselowski’s No. 2 team, and when he heard about the 600 Miles of Remembrance program (which honors fallen service members every Memorial Day weekend during the Coca-Cola 600), Mahoney knew Chris was the perfect candidate. He approached Keselowski, who loved the idea, before the 2018 season, and got everything in motion.

“When it comes to Memorial Day and you hear the stories of those who have made the ultimate sacrifice, your initial thought is you wish you could take it back,” Keselowski says. “You wish you could reverse time and help them and save them, but you can’t.

“All you can really do is honor them, and show respect, and acknowledge the sacrifices that have been made to allow us to live the life we have. The Eckard family has made that sacrifice. They’re close to our team’s heart, and I’m glad to be able to honor them because of that.” 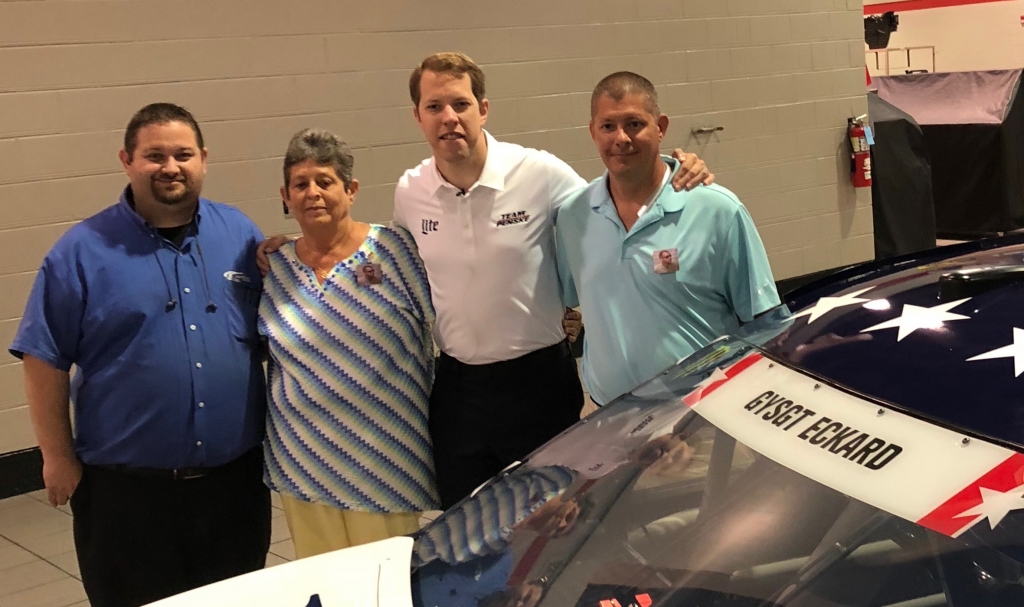 Chad and Eunice will be at Charlotte Motor Speedway on Sunday to watch Keselowski zip around with Chris’ name on his windshield.

Their NASCAR fandom isn’t intense — although Chris’ father worked for Junior Johnson and Buddy Baker most of his life — but this time around, the race isn’t just about the race.

It’s about remembering Chris and the thousands of other soldiers who gave their lives to protect ours. All the families who, like the Eckards, never got that return helicopter.

But the moment isn’t all about grief, either. It’s about respect. And love. And remembrance.

At least that’s the way Chris would have wanted it.

“When (his sons) get old enough to truly understand,” Chad says, “I hope that by us keeping his name alive, they will be able to see what an outstanding father and soldier their dad was.

“He helped save other people’s lives. It meant more to him than anything else in the world. … Now that’s the biggest thing, just keeping his name alive. 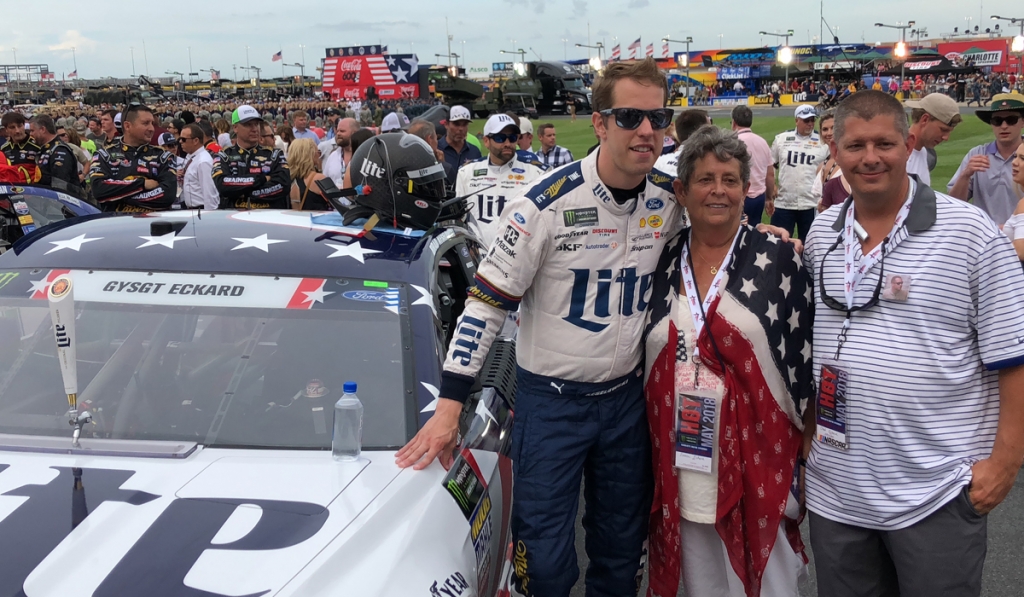