Despite finding himself involved in three different on-track incidents that left his Discount Tire Ford Mustang bumped and bruised by the end of Sunday’s race, Brad Keselowski managed a miraculous 12th place finish in the season-opening Daytona 500.

After a rough go in Thursday’s Gander RV Duel 1 forced BK to start in 35th position, Brad repeatedly raced back through the field toward the front. The Deuce even competed for the lead on multiple occasions.

However, luck just never seemed to go the way of BK and the 2 Crew.

Be it getting caught in the wrong line behind a car that couldn’t go, or three different incidents that sent the No. 2 car spinning, despite strong evasive maneuvers to avoid them, Brad and his Ford Mustang were often in the wrong place at the wrong time. The final two of those incidents came late in the race with track position on the line. Each time, thanks to the hard work of the 2 Crew, the Deuce returned to the track at the back of the lead lap pack. On the final restart, Brad and the heavily damaged Deuce laid back, settling for a 12th place finish. 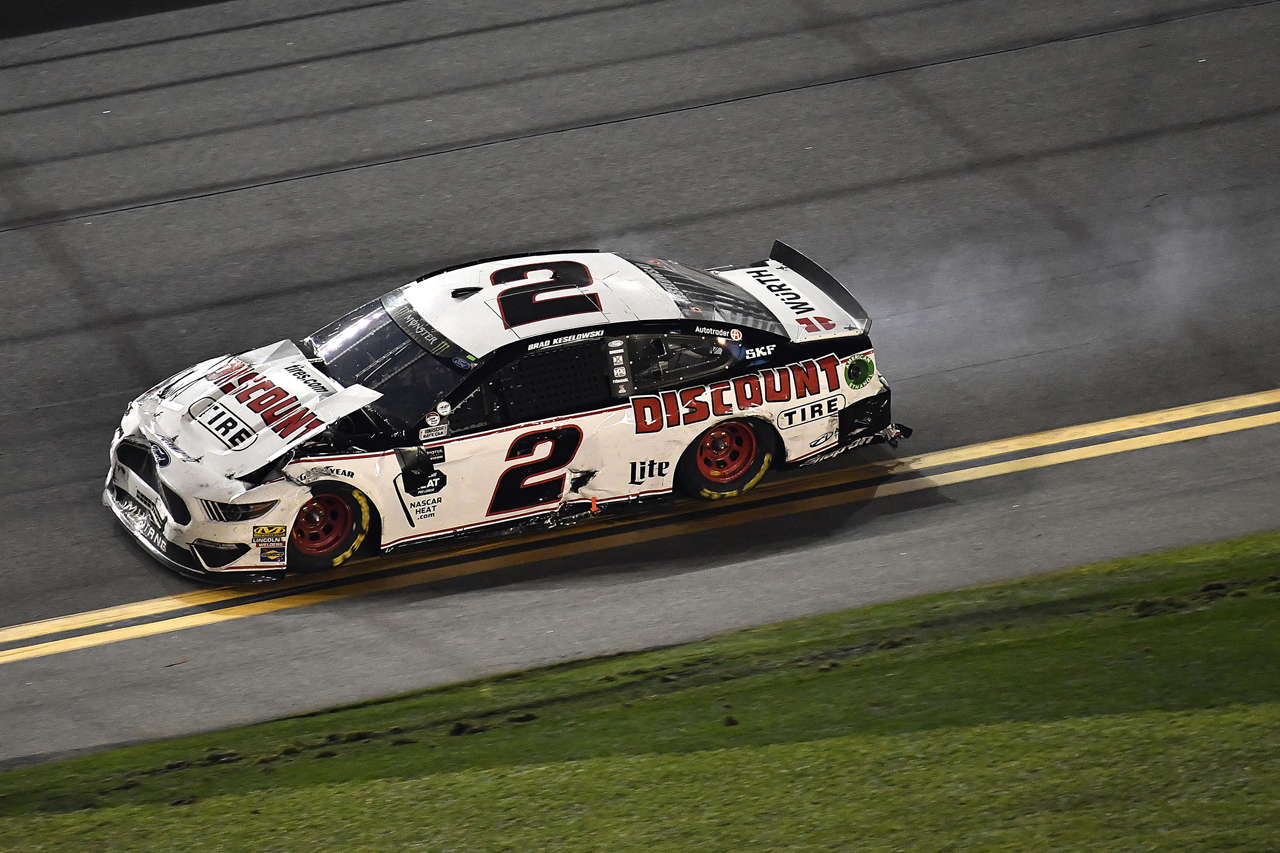 Afterward, the driver of the Discount Tire Ford Mustang lamented the lack of luck he and his team continue to run into at Daytona, in the 500, though he still believes their time will come.

“We just never can get anything to go our way on these deals,” Brad said. “I’m confident when they do we can win. We don’t have to have good luck. But we can’t have all the bad luck we’ve been having.”

The day began with The Deuce in Row 18. But with some hard work and pit strategy, Brad moved up in the field, spending some time in the Top 10 before settling in at P16 at the end of Stage 1.

Kyle Larson and Brad Keselowski are slowly working their way through the field together. Up to 24 and 25 right now.

.@keselowski makes a scheduled stop under green on lap 16 for fuel only. #Daytona500

Much of Brad’s success early in the race came along the inside lane of the race track, which hadn’t been a factor for most of Speedweeks. But BK foreshadowed a change in that regard when talking to the FOX Sports crew before the race.

“I think you’re going to have a hard time running the top because of the heat,” he predicted. “I think the cars will be too slick to be in a row like that and they’ll end up wrecking each other and that’ll make the race double-file back up.”

Indeed, double-file was the name of the game for the entire race, making for one of the most competitive Daytona 500s in recent vintage.

The Deuce ran fourth at the end of Stage 2, picking up seven stage points in the process.

After pitting for tires and fuel during the stage break caution, Brad restarted back in P15 and ran in that range for the first 40-plus laps of green flag racing. After a caution, the race went back green with just over 30 laps to go, and the field went three-wide for the first time all day. BK took advantage, moving up to 7th position, where he ran when a caution came out for debris on Lap 174. 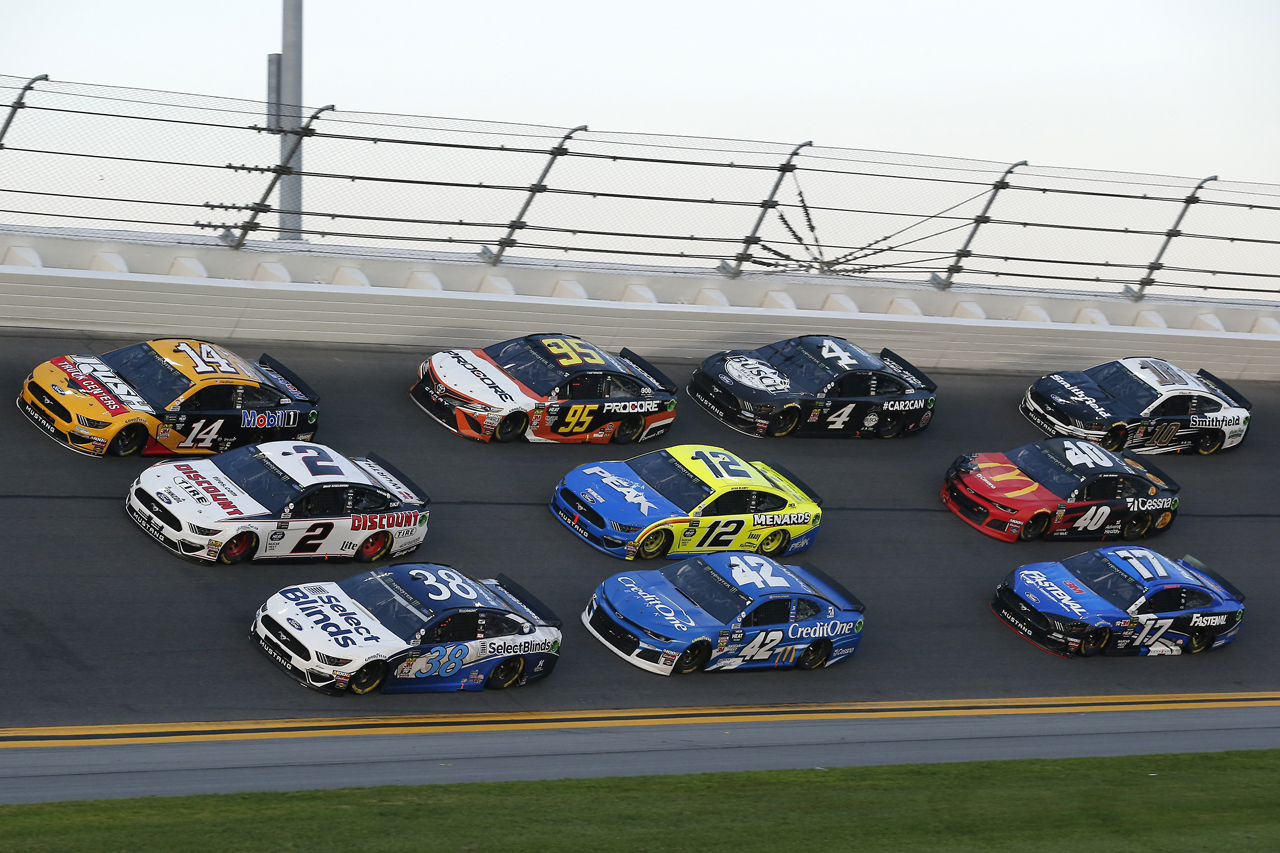 On the ensuing restart, bad luck started to find Brad.

First, he wound up in the wrong line and when the No. 20 car of Erik Jones, which restarted third, had a mechanical failure, The Deuce and all the other cars in that inside line got backed up.

“We got in a good spot with about 20 or so to go and I guess the 20 car ran out of fuel,” BK recalled. “The line failed and we went all the way to the back.”

A similar situation struck on the ensuing restart. This time it was on the top line, where the 40 car of Jamie McMurray, who was at the front of the line, had trouble keeping up with the lower line pack. Brad, who was stuck in the top line pack, got shuffled back further. As he tried to make up ground from there, The Deuce had a tire cut down and went spinning on Lap 188, bringing out the ninth caution of the day.

Keselowski loses a tire and brings the caution. So far, so good with avoiding #TheBigOne. #NASCAR #Daytona500 pic.twitter.com/luOyYCrKHL

Thankfully, BK did well to avoid contact with other cars, and damage to the body of his No. 2 Ford Mustang. He returned to the track a lap down, way back in P31.

But for once, that put him in the right place at the right time. When The Big One came for 18 cars, on the ensuing restart, bringing out the 10th caution of the day, BK not only got his lap back, he shot up the leaderboard back into the Top 20.

However, the wrecks just kept on coming, and BK was involved in the next two.

He was back running 14th after a restart with six to go when the 17 and the 42 got together. BK nearly escaped unscathed, but just before he could clear the pile up, the 13 car tapped the left rear quarter panel of his No. 2 car and sent Brad for a spin.

Fortunately, he once again managed to avoid further contact and got right back on the track.

He wasn’t so fortunate the next time. After some repairs, he restarted in P11 with 2 to go, but on that restart, one more wreck occurred when the 14 car of Clint Bowyer made an aggressive move on the 34, but tried to jump back in front a little too early. The pile up began right in front of Brad, leaving him with no place to go as he made contact with the spinning No. 24 car and then slid up the track into the No. 62 car, which kept him from hitting the wall.

The front end of the Deuce was thoroughly damaged at this point, but the 2 Crew worked hard to get the car back out there for the final restart and this time Brad, knowing he didn’t have the aerodynamics to race with the leaders, hung back as the field sorted out to the finish, settling for 12th place on a day that could have been better but also could have been much worse.

The 12th place finish, plus the points gained from his fourth-place finish in Stage 2, give BK 32 points in the season-opening race, good for 11th in the first Monster Energy NASCAR Cup Series Standings.

The Series shifts slightly north, to Georgia, for race two next week, the Folds of Honor QuikTrip 500 at Atlanta Motor Speedway next Sunday, February 24. Coverage begins at 2pm ET on FOX.