The founder of Discount Tire, Bruce Halle, passed away just after the start of the new year. As many of you know, Discount Tire sponsored the Team Penske No. 22 car in the Xfinity Series, and just this fall, announced it was coming on board to support the No. 2 car in the Monster NASCAR Energy Cup Series.

Mr. Halle, to me, was a very special person, and his life embodied many things that move and inspire me. He didn’t come from a prominent business family. He went through a tremendous business failure early on. But he continued to work hard and didn’t give up. He kept trying, and it paid off in amazing ways—not just for him, but for many, many people he helped along the way.

We’re going to honor Mr. Halle by running a special Discount Tire paint scheme in the Daytona 500, and as part of doing that, I want to use this blog to talk about him and what made him special. I admired a great deal about him, and learned a lot from him, too.

MADE BY SIX TIRES

Mr. Halle was born in Massachusetts, but he grew up in the same metro Detroit area I did. He joined the Marines and went to Korea, and he once told me a story about he and a bunch of his buddies who were in two foxholes that were right next to each other. The one next to him got blown up and everyone got killed. He survived.

After he came back from Korea, he went to college and eventually started an automotive business in Michigan that went bankrupt in his 30s. His partner in the failed business left him with six tires.

He took those six tires, sold them, and then kept selling used tires, selling them for almost nothing. That’s where the name Discount Tire came from. He started with a store in Ann Arbor, just outside Detroit, and grew the business until it was one of the most successful companies in America, which is pretty remarkable. 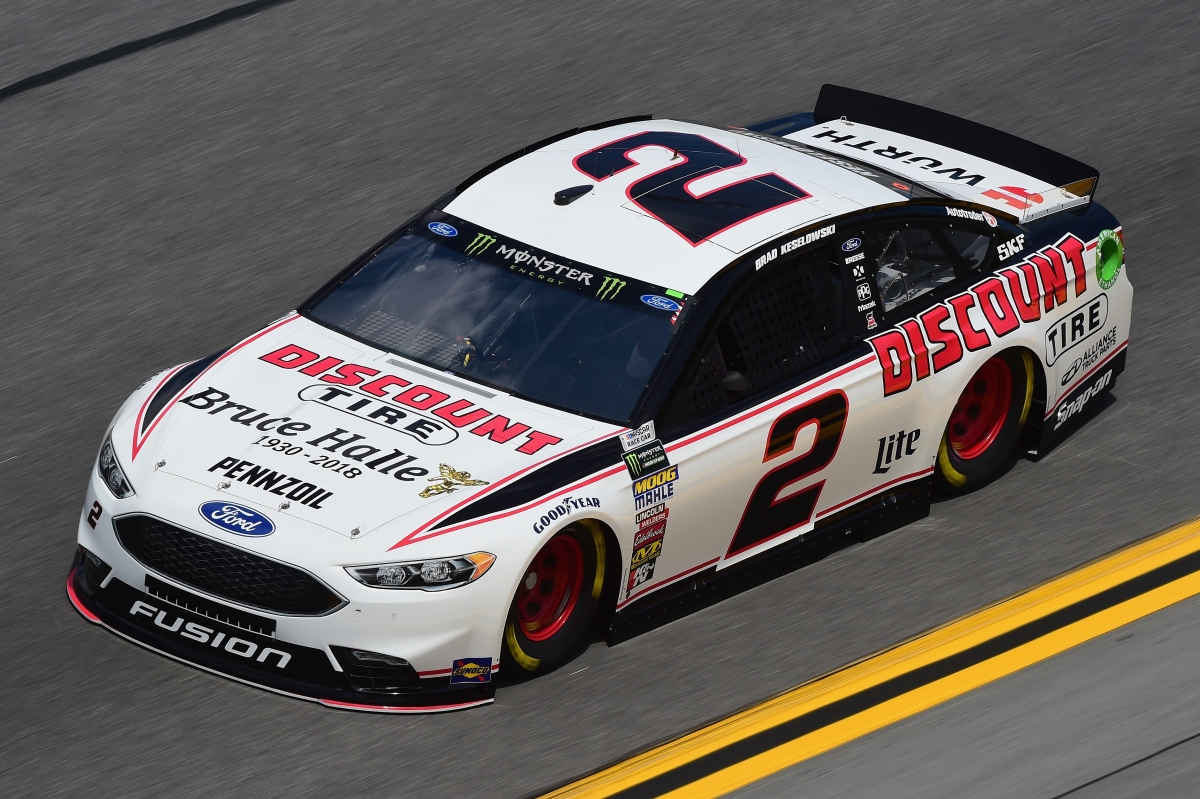 The special Discount Tire paint scheme Brad will be running to honor Bruce Halle at Daytona.

He was a self-made man, and Discount Tire was privately owned, too.

And that’s just the beginning of what made him great.

He also probably has the best reputation of anybody I have ever worked with. Period. The people that worked for him loved him. The community he worked around loved him.

He had a huge foundation that he personally donated millions to. He created a scholarship that sent some 2,700-plus of his employees’ children to college. A powerhouse of good came out of his success.

He showed that you could be a capitalist, and be a good guy, too.

I met Bruce in the summer of 2009. Roger Penske and I had talked about having me drive for him, and I’d explained that I’d only do it if we had an Xfinity team. So he went out and worked really hard to land Discount Tire as a sponsor.

But Discount Tire had one small caveat before they would agree to sponsor the car.

They wanted to meet me.

So one Wednesday during the middle of the race season, I flew to Scottsdale, Ariz., to meet Bruce Halle. We sat down and had lunch, and we talked. He asked me about where I was from. He asked if I thought we could win. (I did.) We talked about family. We talked about life. We talked about a lot of things that weren’t related to racing.

A lot of things struck me about him that day. Most people that run a huge, self-owned company the size of Discount Tire have gigantic egos. They show very little humility. He wasn’t that way. He was really quiet and humble. He was a very good listener.

Nothing was set when I left that day. But later that night, I heard from Mr. Halle.

He said he would sponsor the car.

As I got to know him later, I got to see how great he was with his employees. Just the way he talked with them, the way he listened to them, how lighthearted he was—it was really refreshing.

Every year, Mr., Halle would invite me to meet him in Lake Tahoe, where he had this employee retreat. And at the employee retreat, he would take his best people. We’re not just talking store managers. If you were one of the best tire changers at Discount Tire, you might be in Lake Tahoe on a paid vacation with your family. I was lucky enough to get to know his son-in-law, Michael Zuieback, at those trips as well. As the new CEO of Discount Tire, Michael is going to do an amazing job continuing Bruce’s legacy.

What I loved about those meetings was the way Mr. Halle talked and engaged with everyone. He shared his thoughts about his company with everyone who was there, and the values he wanted it to stand for.

One of my favorite things Mr. Halle did was institute a policy where if our car won, everyone in Discount Tire corporate got to wear jeans the next day. Everyone.

I always thought that was so cool. 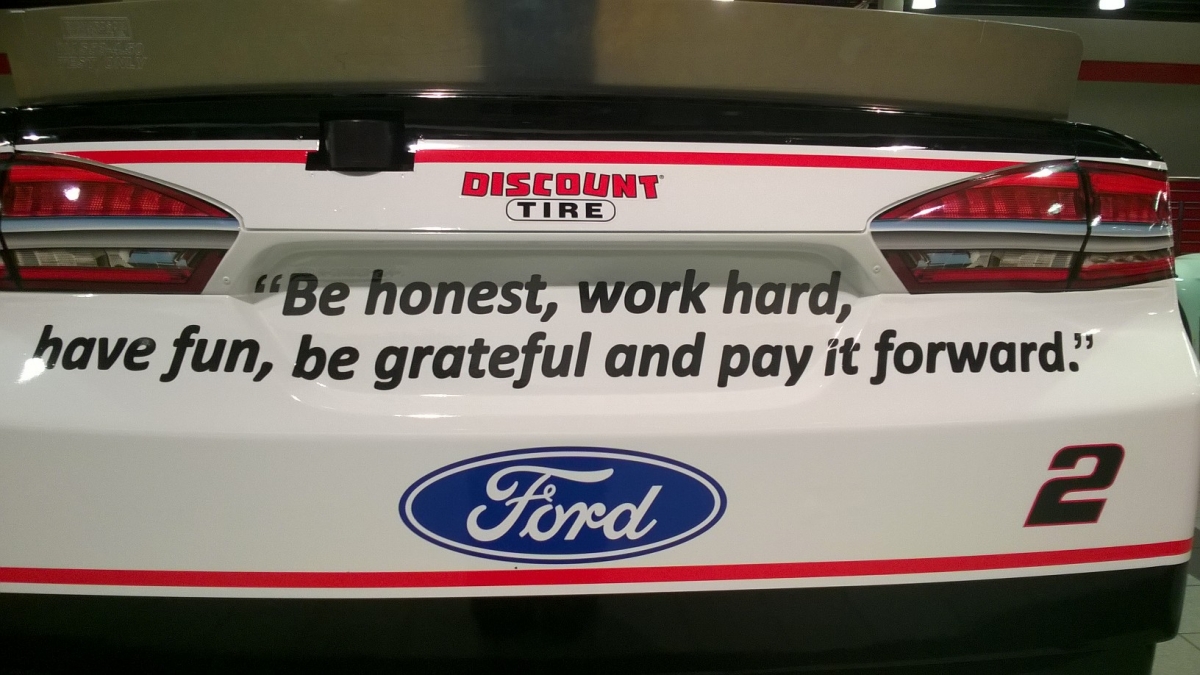 The five values of Bruce Halle.

I went to Mr. Halle’s funeral, and I have to tell you: It was one of the toughest funerals I’ve ever been to.

There were so many people there, from so many different walks of life. He was 87, and for people that age, the sentiment is typically something like, “He lived a good life.” For him, you could feel that his impact would really, really be missed. There was a lot of crying. It spoke to how much the community thought of him, and to the legacy he left behind.

One thing he always did—this was one of his personal hallmarks—was carry around small pins in the shape of an angel, and he’d give them to people. He was Catholic, a very religious man, and he’d say, “God bless you. God bless your family. Here’s this pin, symbolizing how I hope the angels are always with you.”

Mr. Halle had five key values that he used in his life, and I really like them a lot. I’d like to share them here, and in his honor, also talk about how I plan to apply them in my own life. They are:

I’m thrilled to be honoring Mr. Halle at Daytona with the paint scheme you see here. It’s got his five values on it along with an angel, and hopefully, we can get it to Victory Lane. More than anything, though, I’m excited for people to see the car, and maybe learn a little more about Mr. Halle’s story.

Hopefully, he can be the kind of inspiration to others that he has been to me.