Sometimes, you just have a great story to tell.

This is one of those times. So sit back, relax and enjoy.

For some reason, after every racing season, I always get sick. It happens every year. Like right when things wrap up, I’m sick for a week. Even when I won the championship in 2012, I was sick at the banquet for like three days. It was terrible. It’s like my whole body just lets itself go and says, “The season’s done, and I’m done, too.”

In the winter of 2007, I had just moved to North Carolina, and been there three or four months, tops. I was 23. Not that I wasn’t old enough to be out on my own, but it was the first time my mom and dad were thousands of miles away. 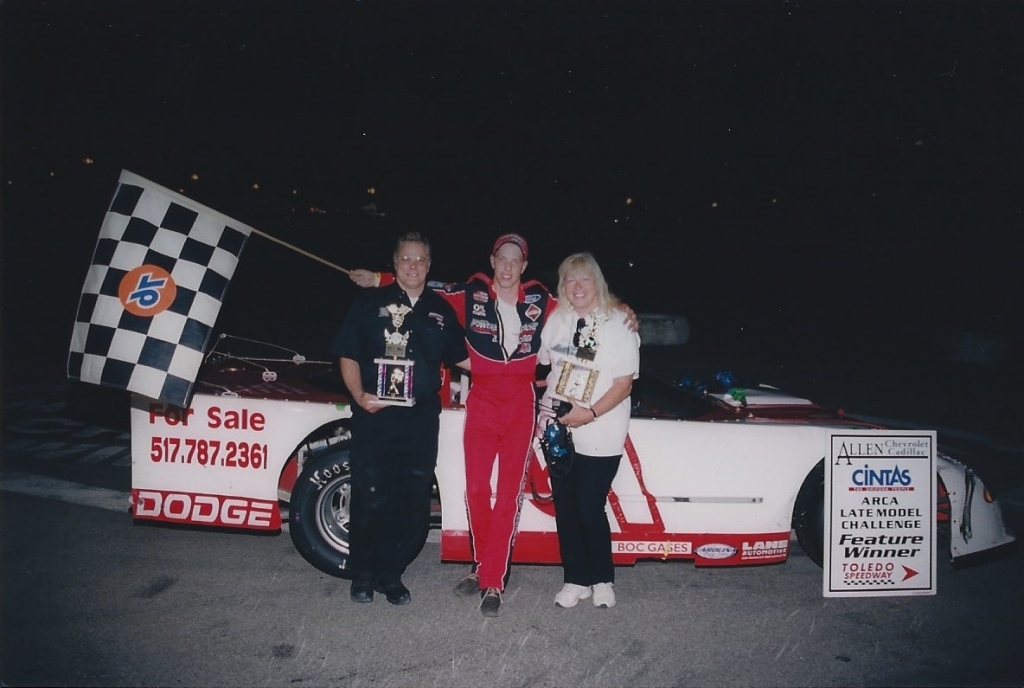 And sure enough, I got sick right after the racing season. Only I didn’t just get a little sick. I got near-death sick. Two days went by where I was almost literally dead to the world, just laid up in my townhouse.

It got to the point where I needed someone to take me to the hospital.

This is the moment when, under normal circumstances, you’d call home and let your folks help you out. But I couldn’t do that—or didn’t feel that I could—because I thought I might give my mom a heart attack for the second time in a few months.

FOUR WHEELS TOO MANY

A few months earlier, not long after I had started driving part-time for Dale Jr., I was at a road course, Virginia International Raceway. I was tooling around on a four-wheel ATV in the infield while I watched another driver, Andy Pilgrim, test a car. 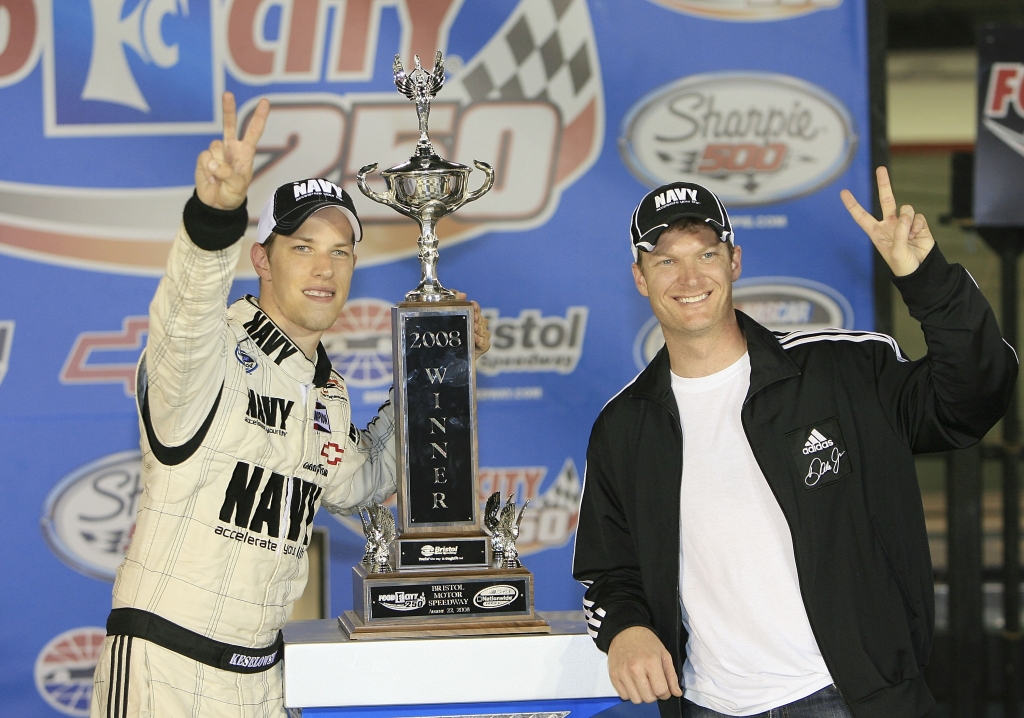 Andy was a professional road course racer. (Side note: Andy was Dale Jr. and Dale Sr.’s teammate in the ALMS series in 2001. Running Andy in Dale Jr.’s Nationwide car for the 2007 road course events was a tribute to their enduring friendship.) So I was riding the ATV to the corners of the infield to study Andy’s techniques, and then just screwing around.

The thing was, I’d never ridden a four-wheeler before, and I’d gotten braver as the day went on—until I got too brave. I was probably going 50 or 60 miles per hour with no helmet, wearing sunglasses, when I lost control of the ATV and ran smack into a chain link fence.

Believe me when I tell you: I have no idea how I lived through that one. That crash should have killed me.

First off, I bet I flew 40 or 50 feet through the air. I literally knocked down 30 feet of chain link fence with my body. When I was finally able to get up—and I’m not really sure how long that took—there was a decent amount of damage.

I had this huge hematoma on my leg, a massive pocket of blood where my leg probably should have broken, but didn’t. My whole face was bleeding. The only thing that kept me from losing an eyeball were my sunglasses, but when my face hit the fence, the sunglasses pressed into my head so hard they broke my left eye socket. And to add injury to injury, I was wearing braces at the time, so my mouth was full of blood where I’d cut my gums on my braces.

I was a mess. So I started stumbling toward the nearest building to get help. And when I got there, guess what that building turned out to be?

A summer camp for kids.

I limped into the doorway, blood pouring out of my face, dragging my leg like a zombie, and a roomful of five year-olds looked up at me. Then the kids screamed like they’d just seen Jason or someone else out of a horror movie. An adult yelled, ‘Oh my God!”

A few minutes later, an ambulance came to pick me up. As they started to load me in, I spotted what was left of the four-wheeler. It was totaled. Half the suspension was 30 feet from the rest of the suspension.

I began to freak out. I think I said to a paramedic, “Oh my God. I’m going to get fired!” I remember starting to walk back to the ATV like I was going to put it back together, and the ambulance guys saying, “No, man! We need to take care of you!”

Finally, the ambulance did carry me off and drive me back to Pit Road, which took a while. Virginia International Raceway is a pretty big road course, and where I’d wrecked the four-wheeler was a good mile away from where Pit Road was.

Imagine what it must have been like for Andy and the rest of the team when I reached them. They had been practicing and testing all day. It’s 5 o’clock. An ambulance shows up and says, “We’ve got your driver.” And they’re like, “What are you talking about? The test is done. The car’s loaded up and there isn’t scratch on it.”

Then the paramedic says, “No, your other driver.”

They put the four-wheeler on a flatbed and drove it back to North Carolina, but it was basically destroyed. The whole ride home, I was spinning. I couldn’t afford to fix the ATV, and on top of it, I tore down 30 feet of fence, which I’d also have to pay for. And worse yet, I had to explain all of this to Dale Jr. because he wasn’t there.

At that point in my life, this was a top contender for the worst day ever.

T.J. Majors, a friend of Dale’s—and eventual friend of mine—talked me off the ledge.

“All right—it’s the NASCAR off-week,” he said, which it was. “Dale Jr. is on vacation. Here’s what you need to do. Wait till about nine o’clock at night, and then call him. You’ve got to tell him what happened, and you’ve got to tell him tonight before somebody else does. But wait till tonight. He’s having people over—because it’s the off-week—and he and the boys will start partying around eight or nine o’clock. And when you tell him, he’s going to be cool about it. As long as you tell him. He can’t hear it from someone else.”

So that’s what I did. At nine o’clock that night, I called Dale Jr. He answered. I told him what happened, and like T.J. had said, he was in a great mood.

“Oh shit, man,” Dale Jr. said, “Don’t worry about it. Stuff like that happens all the time. That’s just part of it.”

It was the biggest sense of relief ever, almost like your dad saying, “Don’t worry about it. When I was a kid, I wrecked stuff, too.” I never heard another word about it. He never made me pay for the four-wheeler, and he didn’t fire me. 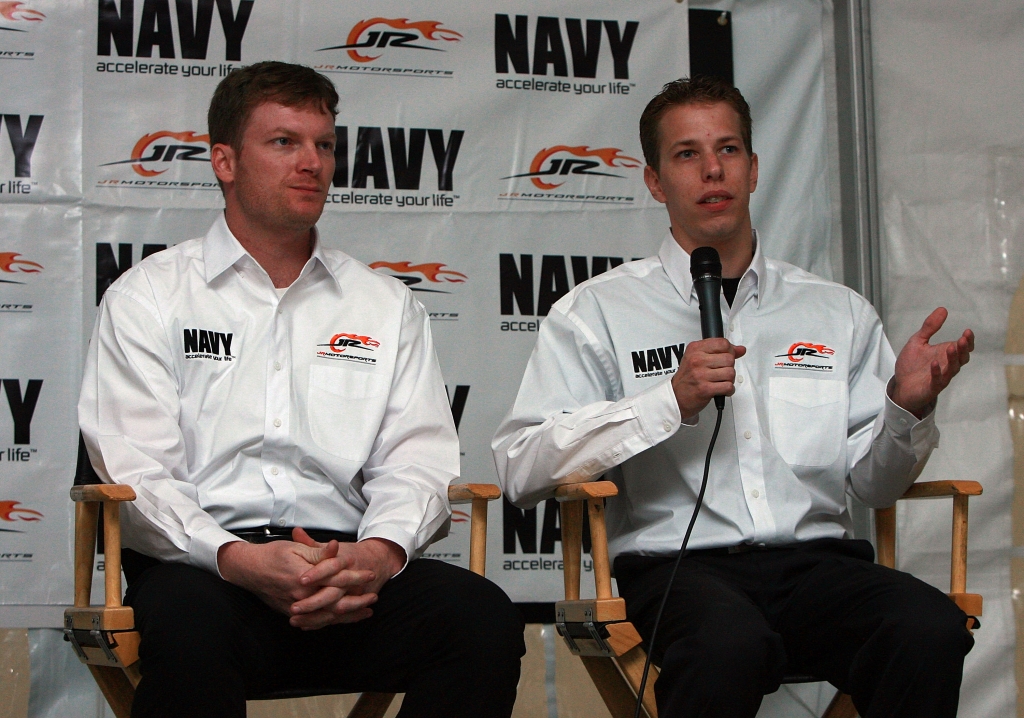 Sometimes, I think about what would have happened if I would have called him the next day, or didn’t call him, and he heard it from somebody else. (Dale Jr., thank you for not firing me.)

The thing was, I didn’t tell my mom about the whole episode. She got so nervous about me when I raced. I’m her youngest son, her baby. The four-wheeler crash would definitely cause her to lose it.

But of course, not long after, she wound up coming to a race. And when my mom saw the cuts and bruises on my face, she just about had a stroke.

So fast forward back to me in the house, death-bed sick. I didn’t want to call Mom, and I needed someone to get me to a doctor.

So I called Dale Jr., and his step-father, Willie Jackson, answered. He came by and took me to Urgent Care, and when I got there, I started going into convulsions.

Then I passed out. I was really, really sick.

When I woke up, it took me a minute to get my bearings. I was in the house of Dale Jr.’s mom, Brenda Jackson. Turned out I’d had a horrible case of the flu, and if Willie hadn’t shown up when he did, there was a good chance I might have died in my townhome.

The hospital was too nervous to send me home alone, so Brenda and Willie took care of me at their home for four or five days, until I was finally strong enough to recover on my own. To this day, I’m incredibly grateful to both of them for doing that.

Brenda kept checking on me for the next weeks, but once I was home, I made sure to do one thing I should have done back in the beginning.

I called my mom.