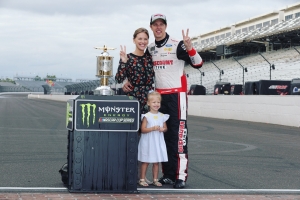 When Paige asks this particular question, it’s a tough one, because what she’s really asking is how confident I am about that day’s race. Comfy, so we’re clear, is my shorthand for saying, “We’re not that good.”

Believe me when I tell you that before the recent races at Darlington, Indianapolis and Las Vegas, I gave her the same answer each time. “Go with comfy.”

Going into every race, three things are going to determine how you finish: speed, execution and luck. You can get a little tell on speed before the race starts. You don’t get a tell on luck, and you don’t get much of a tell on execution.

The truth is that the way this season had gone to that point—aside from our win in the year’s opening exhibition race—we just couldn’t get it together. We’d been pretty spotty. We’d had ups and downs all year on Pit Road. We’d definitely had them with the decisions I’d made. And for whatever reason on the luck side, it seems like whatever strategy we picked, the other side would come out. If we short-pitted, the race would go long. If we went with a long pit, we would get hosed on a short caution.

So heading into Darlington, Indy and Vegas, I wasn’t particularly optimistic. At all three of those races, we practiced somewhere around 10th to 15th. We qualified in the teens. I felt like we’d run okay, but I didn’t think we would win any of them.

And then we won them all. 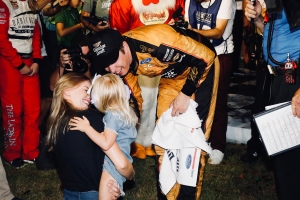 As a track, Darlington is very, very unforgiving. It’s super narrow and requires extreme precision at high speed to drive it. Then on top of all the racing challenges, there’s the heat.

When Darlington arrives, it’s always the hottest part of summer in South Carolina, and there ain’t no hot like a South Carolina hot. I can put it this way: Two weeks later, when we raced at Vegas, it was 105 degrees. Darlington was probably 90, and it felt way hotter. Something about the humidity transfers the temperature to your body in such a different way. It’s like having a bucket of steaming hot water just dumped on you. You can’t do anything about it.

Once the race started, it was clear that we were no better than a fifth-place car. But we had a pretty good strategy that played out for us luck-wise. We decided to long pit the race, which means we would stay out longer than everybody else and hope for a caution. And that happened.

We were running somewhere around sixth, and on the long pit we were second. Then as we pitted under yellow with the leader, Kyle Larson, we nailed the pit stop and came out in the lead. From there, we won the race. It really was that simple. It felt like redemption because in 2015, we led most of the race, and came out second in the last pit stop and lost. 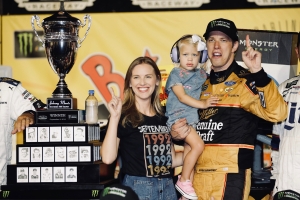 It was a momentous win for a few reasons. Taking the checkered flag in a race like the Southern 500, with all its history and heritage,—and to do it after winning the Xfinity race the day before—was about as special as it gets. It was also big for generating team confidence. After you win a race, everyone from me to Paul to the engineers and mechanics that work on the cars want to work that much harder to find more speed.

The following weekend, we were at Indianapolis looking to carry our momentum into the Brickyard. Unfortunately, Mother Nature had other plans, and a storm postponed the race until Monday.

So we did what any good team does.

Paige and I took Scarlett to The Children’s Museum of Indianapolis, and just chilled out. It was pretty cool. It’s a huge museum, the biggest museum for kids in the world. They had a working carousel there from the early 1900s that Scarlett loved, and she was big on the little tea houses and other things they had there, too. We all had a great time. 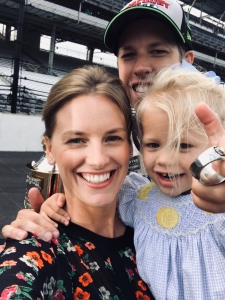 As far as the race went, we had no idea whether we had speed or not going in because the storm kept us from practicing. And once the race began, it was pretty clear we didn’t have any. We didn’t run all that well. Again, we probably had what was at best a fifth place car.

So we were setting up to have kind of a frustrating day when we decided to run a really long race on pit road. Again, we’d stay out for long stretches—similar to what we did at Darlington—and hope to catch a yellow.

Sure enough, we caught one just as we were pitting late in the race, which cycled us out to about 8th with brand new tires, and just a few laps to go. We had an opportunity to drive through the field, as hard as that might be, and went for it.

As we were going through those closing laps, I honestly didn’t think we’d be able to get through all the cars. Indy is such a tricky track to pass on. But we were so fast with the new tires that all of a sudden, we were able to make the pass on Denny Hamlin with one to go.

I have to tell you: It was like a dream come true, and that feeling didn’t fade. When it was time to kiss the bricks, it felt a little surreal. In my mind, I could see all the images of famous drivers having done it before: Dale Jarrett, Jeff Gordon, Jimmie Johnson, Tony Stewart. It’s still almost hard to believe that I did it too, and got to add my name to that legacy. 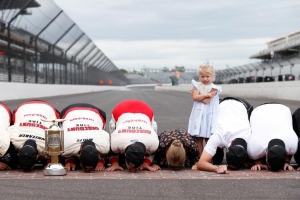 Scarlett definitely didn’t feel the same way about kissing the bricks. When the team was setting up to do it, Paige told her, “Hey, we won! Now we get to kiss the bricks with Daddy!” Scarlett looked at her mom like Paige had three heads. Not happening. I think she got some of that stubbornness from me.

The win was also a big one for Team Penske. Roger Penske had never won a Cup race at Indy before either, and because of the storm, he’d actually had to leave on Sunday. So it broke my heart a little bit for him that he couldn’t be there for it, but I was honored to get him that win.

Before the race weekend had even started for Las Vegas, I was already gassed. One of the great things about winning is that everyone wants to celebrate those wins with you.

But after two weeks of sponsor meetings and media sessions, I was pretty exhausted. On top of that, we were traveling to the West Coast on a short week thanks to the weather issues at Indy, and it was the start of the Playoffs. By the time we got to the race, part of me just wanted to run it and get home—especially since it was 100-plus degrees out.

Then lo and behold, we won again!

Momentum is big in anything, and looking back, I think it played a big role in our success at Vegas. Having great pit stops at Darlington built the pit crew’s confidence. Then we went to Indy, and did it again. So we’d been executing at a very high level coming into the race, and the team kept it up for the South Point 400. We kept gaining positions with each pit stop. Then it was up to me to execute on the restarts, and once I got to the lead, we were able to keep it.

Like the others in this stretch of consecutive victories, this win was big. First off, it got us a pass to the next round of the playoffs.

But even bigger than that, it was the 500th win for Team Penske. Coming into the racing season, getting win 500 had been an overall goal for Team Penske, and as the Indy Car season was winding down, it was looking like it might not happen unless the NASCAR guys delivered it. So that wound up being one of the craziest parts of our three-week run: We actually got Team Penske wins 497, 498, 499 and 500.

It was an amazing accomplishment to be part of.

I’ve been asked about what winning three races in a row means in terms of our championship hopes, but I don’t really want to think about the streak in that way.

I’d rather appreciate it on its own, and on its own, it’s special. (Incidentally, I don’t think it’s a coincidence that it came after taking a break from racing, and traveling to Germany.)

We won three Cup races in a row. We swept the weekend at Darlington. We won two of the crown jewels in NASCAR, which is something I’ll never forget. We got Roger Penske his first Brickyard win, which was incredible, and then we got him win No. 500, too. To top it off, we got a Playoff win.

There’s almost too much packed in there for me to appreciate now. It feels like one of those things I’ll enjoy looking back on for years to come.

In the short term, though, I will say this…